A blog reader, John, commented that Christianity as a "progressive religion" has to open up to new thinking and challenges today:

"Why I say this is because homosexuality, transgender, lesbian, bisexual issues are prevalent today. The Catholics are dead against it, but here we have the Anglican Bishop Gene Robinson who is openly a homosexual. Now who is right and who is wrong?
Could God the Almighty who created men and women, Heaven and Earth, have made a genetic mistake? Or is homosexuality a sin?"

God condemns unnatural sex both in the Old and New Testament. He sent fire and brimstone to rain down on Sodom because its inhabitants practised sodomy.

Because of this, God gave them over to shameful lusts. Even their women exchanged natural relations for unnatural ones.

In the same way, the men also abandoned natural relations with women and were inflamed with lust for one another. Men committed indecent acts with other men, and received in themselves the due penalty for their perversion.

As to whether we are born gay, many of the initial studies, which were highly touted as "proof" for a biological (genetic) basis for homosexuality, have been contradicted later by more thorough studies.

The Bible states very clearly that there is no provision for any alternative lifestyle for sexual fulfillment apart from a monogamous, heterosexual relationship between a man and a woman who are committed to one another by marriage.
http://bit.ly/19dSlGo

Though the Bible is firm and unequivocal in its stand on homosexuality, how we approach the homosexual as a person is strikingly different. We hate the practice as the Bible does not condone it. But we love the homosexual, putting ourselves in his or her shoes, that he or she has already suffered enough, having to face the pressure from society’s disapproval.

Just as how Jesus dealt with the loose women who crossed His path, we must treat the homosexual with love, compassion, empathy and a non-judgmental attitude. We need to treat sexual sins, such as homosexuality, as if they are non-sexual ones such as greed or lying. God’s forgiveness is equally open to those who commit sexual or non-sexual sins. 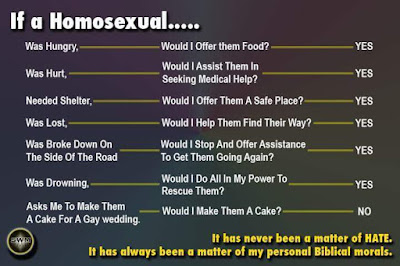 RESIST AND REACH OUT
http://www.charismanews.com/opinion/in-the-line-of-fire/43346-the-great-gay-deception