“USE AND THROW” MENTALITY

In these days when we're accustomed to a "use and throw" mentality—what with the advent of styrofoam boxes for food takeaways—commitment in marriage is becoming increasingly rare. 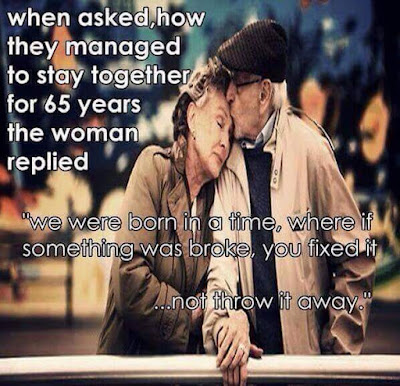 Only God's love can move us to be committed so that we stay true to His original intent—a monogamous, heterosexual relationship within the framework of marriage.


Conflicts have to be worked out. Do not opt for the easy way out (divorce) by citing irreconcilable differences.

God hates divorce (Malachi 2:16). This fact is also borne out in Jesus’ teachings on marriage and divorce in Matthew 19:4-9:

“Haven’t you read,” Jesus replied, “that at the beginning the Creator ‘made them male and female,’ and said, ‘For this reason a man will leave his father and mother and be united to his wife, and the two will become one flesh’? So they are no longer two, but one flesh. Therefore what God has joined together, let no one separate.”

“Why then,” they asked, “did Moses command that a man give his wife a certificate of divorce and send her away?”

Jesus replied, “Moses permitted you to divorce your wives because your hearts were hard. But it was not this way from the beginning. I tell you that anyone who divorces his wife, except for sexual immorality, and marries another woman commits adultery.”

Even so unfaithfulness does not necessarily mean that a marriage has reached a dead end. Why invoke unfaithfulness so hastily as a ground for divorce though it is our right?

Have we considered the virtue of grace and forgiveness which we talk so much about and which the prophet Hosea epitomised?

Of course, the other incontrovertible biblical sanction for remarrying (apart from unfaithfulness) is death of the spouse.


Personal differences and external forces may trigger marital conflict. Understanding the underlying dynamics behind these two factors is often the first step towards conflict resolution. http://bit.ly/1beb3YE