Though we are supposed to reign like kings, we are also told to be like servants. How do we reconcile these two positions? The believer's identity—a biblical perspective.

How should believers see ourselves? Though there are various metaphors the Bible uses to help us understand our identity, it can get confusing at times.

From the viewpoint of relationship and intimacy, we are to see ourselves as sons of God, our heavenly Father (Romans 8:14-15).

With regards to discipline and suffering, we are to see ourselves as soldiers, athletes and farmers (2 Timothy 2:3-6).

When it comes to spiritual sensitivity, we are to be like sheep—listening intently to the voice of the Chief Shepherd (John 10:27).

But though we are supposed to reign like kings, we are told to be like servants. How do we reconcile these two extreme positions?

Because we identify ourselves with Christ’s resurrection, we now reign like kings. But with regards to the practical outworking of our faith, we are to be like servants.

“God raised us up with Christ and seated us with him in the heavenly realms in Christ Jesus” (Ephesians 2:6).

We have victory over sin, death and Satan on the basis of what Christ has done for us at the cross. As for the latter, Christ “disarmed the spiritual rulers and authorities. He shamed them publicly by his victory over them on the cross” (Colossians 2:15).

We are more than conquerors in Christ. We do not have to fight for victory; we just have to enforce the victory that is already ours.

But we should also remember what Jesus shared about ministry—we are to serve because He came to earth with an attitude of a servant. And since no servant is greater than the master, we should emulate the Master (Mark 10:45, John 13:16).

Christ illustrated what He meant by a servant’s heart by washing the disciples feet just before going to the cross. This attitude of humility is described in Philippians 2: 5-8:
Your attitude should be the same as that of Christ Jesus:
Who, being in very nature God,
did not consider equality with God something to be grasped,
but made himself nothing,
taking the very nature of a servant,
being made in human likeness.
And being found in appearance as a man,
he humbled himself
and became obedient to death—
even death on a cross!

Some think believers should be guaranteed success and wealth in this world. They should travel first-class, stay in hotel suites, be driven in limousines and live in mansions replete with swimming pools and private theatre.

However, there is no scriptural support that we deserve a lifestyle befitting that of royalty. We are only reign like kings with regards to our new position in Christ as outlined above.

Moses, the prince of Egypt, was commended as a hero of faith. All the riches, power and pleasures inherent in this privileged position did not stop him from fulfilling God’s calling to lead His people out from Egypt. He chose shame and disgrace instead of earthly wealth and honour because he looked to greater reward to come with the eyes of faith (Hebrews 11:24-27).

Of those listed in the hall of fame in Hebrews chapter 11, there is a category of people who did not receive any earthly reward or deliverance. Instead suffering and persecution were their lot (Hebrews11:36-39).

These unsung heroes of faith are not often quoted in sermons. For human nature is like this: We want to hear more about those who have experienced blessing, deliverance and fulfillment of God’s promises in their earthly life (Hebrews 11:33).

To recapitulate, with regards to our position as believers—being raised together with Christ—we reign like kings but with regards to the practical outworking of our faith, we are to be like servants.

It is incorrect to say, “Since we reign like kings, we should be guaranteed a lifestyle befitting of a king.” To swing to the other extreme is equally incorrect—that we are insignificant, defeated and powerless just because we are lowly servants.

Ultimately, we are called to be faithful with what we have been entrusted (Parable of the Talents). “As each has received a gift, use it to serve one another, as good stewards of God's varied grace” (1 Peter 4:10).

Whether we are apostles, prophets, evangelists, pastors or teachers, how have we been living our lives as faithful servants?  http://goo.gl/WW2Ca5

“Will any one of you who has a servant plowing or keeping sheep say to him when he has come in from the field, ‘Come at once and recline at table’? Will he not rather say to him, ‘Prepare supper for me, and dress properly, and serve me while I eat and drink, and afterward you will eat and drink’? Does he thank the servant because he did what was commanded? So you also, when you have done all that you were commanded, say, ‘We are unworthy servants; we have only done what was our duty.’”
(Luke 17:7-10) 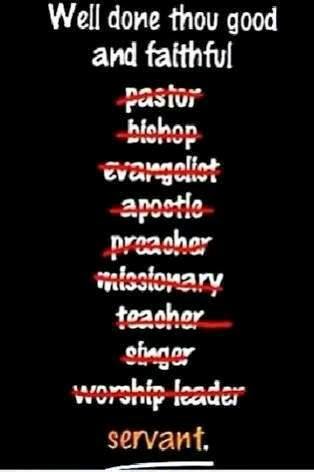 DISCOVERING OUR IDENTITY
Once we have resolved some important questions about our identity, we are well on our way to enjoy sound psychological health. We are also well-positioned to live out God’s calling for our lives. Otherwise our lives might be stuck in the doldrums.

http://goo.gl/iYgsiy
SAINT OR SINNER?
Is the believer essentially a saint or sinner? If he is a ‘saint’, why is he still struggling with sin?
http://bit.ly/1nrRpFb

SELF-ESTEEM AND PRIDE
Many make the tragic mistake in not recognising the difference between self-esteem which is positive and pride which is negative.
http://bit.ly/1dP95jq