Sin has a price. You may be sure of that.

Alexei, much older than Anna, is faithful but lacking in romantic overtures towards his wife. Their depressingly mundane marriage may account, in part, for her tryst with Vronsky.

Early in the movie, Alexei warns, “Sin has a price. You may be sure of that.” Indeed he has hit the nail on the head. As the saying reminds us: “Sin will take you further than you want to go, keep you longer than you want to stay and cost you more than what you are willing to pay.” 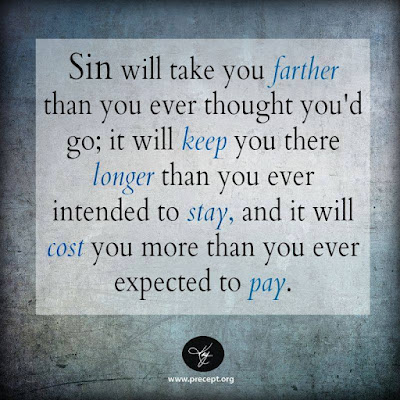 “You may be sure that your sin will find you out” (Numbers 32: 23b). Sin will not let you go. It will surely come back to haunt you.

In a tragic ending, Anna yells out, "God forgive me!" as she jumps into the path of an oncoming train.

How God views sexual immorality is well illustrated in the account when Phinehas, the high priest of Israel in the wilderness, committed a ‘holy murder’. He speared an Israelite man, named Zimri, while he was having sex with a foreign woman, a Midianite named Cozbi. The spear went all the way through the man’s body and the woman’s stomach. What a gruesome way to be joined together—sexually and by a spear (Numbers 25: 7-8).

Because Phinehas identified with God’s anger against sin, the plague which God brought against Israel for idol worship and sexual immorality with foreign women (Numbers 25:1-3) was stopped. Nevertheless 24,000 had already perished in the plague (Numbers 25: 8-9). Zimri all the more deserved the swift judgment inflicted upon him by Phinehas as he (Zimri) had brought the woman into his tent for sex while the Israelites were weeping for their sins (Numbers 25:6).

Phinehas was the national hero who was so zealous to preserve God’s honour that he displayed ‘righteous anger’. His act of killing the couple made atonement for the nation of Israel; God’s anger was averted.

Lest we say God’s abhorrence of sexual immorality is only found in the Old Testament, we are warned in a cross reference in the New Testament: “We should not commit sexual immorality, as some of them did—and in one day twenty-three thousand of them died” (1 Corinthians 10:8).

Even if one escapes the consequences of sexual sin in this world, one will eventually suffer for it, unless one’s sins are forgiven through faith in Christ:

Eternal consequences of sexual sin:
“Stolen water is sweet;
food eaten in secret is delicious!
But little do they know that the dead are there,
that her guests are deep in the realm of the dead” (Proverbs 9:17-18).

The consequences of sin are inevitable. This is not only true for sexual sin but all types of sin including murder, corruption, idolatry, lying, etc. If one manages to escape sin’s penalty in this world, one will suffer the consequences in the hereafter.

However there is one difference between sexual sin and other sins. “All other sins a person commits are outside the body, but whoever sins sexually, sins against their own body” (1 Corinthians 6:18).

Our body is the temple of the Holy Spirit. The only person with whom one should be joined together in a one-flesh relationship is one's spouse. Indiscriminate sexual relationships may lead to dangerous ‘soul ties’ which keeps a person under bondage.

It may open oneself to evil spirits, such as the spirit of lust, from the sexual partner. Satan enters through an ‘open door’ because one has given him permission through the illicit liaison.

ANNA KARENINA:
The movie is based on a novel by Leo Tolstoy of the same name. For this post some facts about the movie has been sourced from Wikipedia.
http://en.wikipedia.org/wiki/Anna_Karenina_(2012_film)
www.youtube.com/watch?v=rPGLRO3fZnQ

RELATED POSTS
SOUL TIES
What is an ungodly soul tie? How can one be set free from it?
http://limpohann.blogspot.com/2012/10/soul-ties.html

THE ALLURE OF GREY
If we’re not careful, we might just be sucked into a maelstrom that titillates our senses: Twilight, Sex and the City, Harry Potter and now Fifty Shades of Grey.
http://limpohann.blogspot.com/2012/08/the-allure-of-grey.html