When push comes to shove, which do we choose to uphold? UNITY or TRUTH. 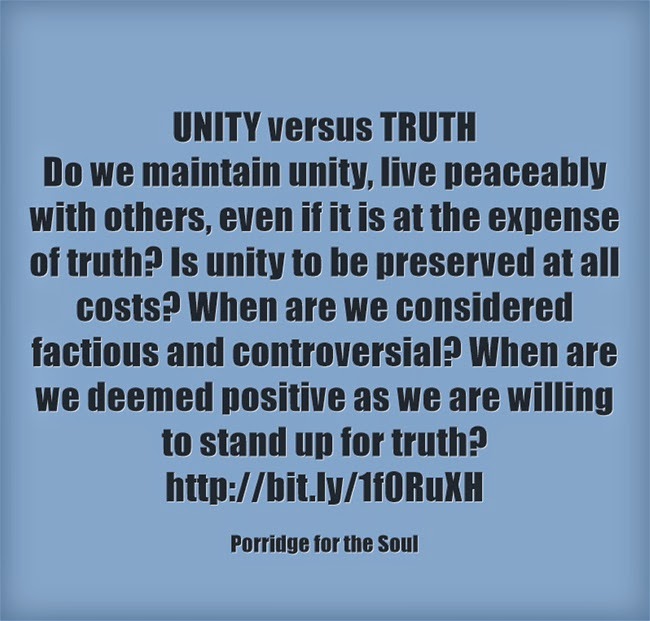 The believer is called to maintain the unity of the Spirit through the bond of peace (Ephesians 4:3). Unity is also an important goal we should strive to attain through the five-fold ministry of the church (Ephesians 4:13). Paul chided the Corinthian believers for having a factious, divisive spirit (1Corinthians 3:3-4). 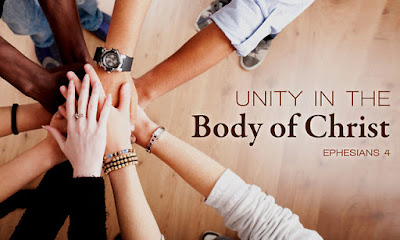 Psalms 133 explains why God’s people should live together in unity, the reason being this: God showers His blessings on a united community.

Christ fought hard to bring us into a state of unity. He paid with His blood to bring believers together as one (Ephesians 2:13-14).

In John 13:35, Jesus taught:  “By this everyone will know that you are my disciples, if you love one another.”

If believers are constantly envious, jealous and bickering, how can they minister to a world that is lost? If they cannot settle their “in-house” problems, how can they help the needy? Furthermore, the church stands before a watching world as a model of morality and conduct; its reputation is at stake if it cannot walk the talk.

No doubt unity is an important ingredient in the life and ministry of a community of believers.

However, difficult situations may arise which force us to choose between unity and truth.

Many of us are familiar with the incident where Paul opposed Peter publicly. The latter was dining with the Gentiles but suddenly withdrew from them when the Jewish group which advocated circumcision appeared (Galatians 2: 11-16).

How can Peter dine with the Gentiles and then, out of fear of the circumcision party, compromise his beliefs? Peter, a Jew like Paul, should have known better that no one is justified by keeping the Law, that circumcision is no longer an important requirement and that Jews and Gentiles are equally justified before God on the basis of Christ’s righteousness – through his atoning blood at the cross.

Paul did the right thing when he confronted Peter. He may have appeared harsh towards Peter, an apostle of similar stature. In fact, Paul wasn’t even numbered among the original twelve disciples but came to the scene later. How can a ‘new kid on the block’ tell off ‘big brother’?

The issue at stake was ‘justification by faith’, not by the law. When Peter did not uphold consistently this important principle in his life, Paul had to tick him off.

Yes, by all means, strive to live peaceably with all believers:
“As a prisoner for the Lord, then, I urge you to live a life worthy of the calling you have received. Be completely humble and gentle; be patient, bearing with one another in love. Make every effort to keep the unity of the Spirit through the bond of peace. There is one body and one Spirit, just as you were called to one hope when you were called; one Lord, one faith, one baptism; one God and Father of all, who is over all and through all and in all” (Ephesians 4: 1-6).

We should not identify ourselves by our denominational stance, not allow these leanings to create walls between us.

That said, we should also recognise the following points: 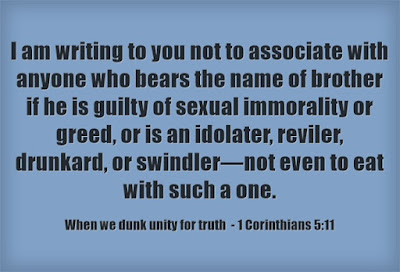 Many years ago a church in a major city in Malaysia had a split. One camp was into healing, deliverance and the supernatural works of the Holy Spirit. The other camp was closed to such ministries, thinking that it is not for the modern-day church.

Through the years, the former has grown by leaps and bounds whereas the latter has remained highly conservative. If the former had decided to remain with the status quo, for the sake of maintaining unity, most probably the immense growth and impact of its ministry would not have been realised. 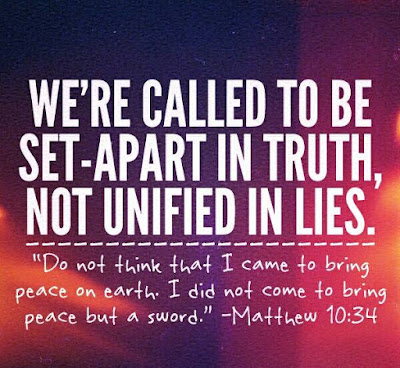 When the issue at stake is a major one – which in the contention between Paul and Peter is ‘justification by faith’ and in the preceding scenario is ‘whether the supernatural works of the Holy Spirit is for the church today’ – truth may have to be upheld over unity.

While it is important to be humble and tolerant to get along well with others, we should not compromise the truth for the sake of unity.

"People who were agreed about the centralities of the faith dividing and separating from one another over matters that were not essential to salvation, not absolutely vital. This is always one of the dangers afflicting us as evangelicals. We can be so rigid, so over-strict, and so narrow that we become guilty of schism."

WHEN DOES TOLERANCE BECOME COMPROMISE?