A practice or belief is not necessarily true just because the majority embraces it or some well-respected leaders endorse it – or because it’s a long-held tradition. To test the validity of the practice or belief, we have to view it through the lens of scripture.

The Bereans were cited as exemplary believers because they questioned what they were taught – even Paul’s teaching – scrutinising it against scripture (Acts 17:11). Any teaching that does not stand up to the test of scripture should be rejected, no matter how eloquent or respectable its proponents might be.

Prominent leaders – like all men – are not infallible, no matter by what high-sounding name they call themselves (apostle or prophet), how many books they have written or how much respect they command from both sides of the Atlantic.

Furthermore, leaders are not immune to deception (Matthew 24:5, 24 and Joshua 9: 3-15). During the end times, deception will be a prominent feature. And even the elect – supposedly mature leaders – can be deceived. 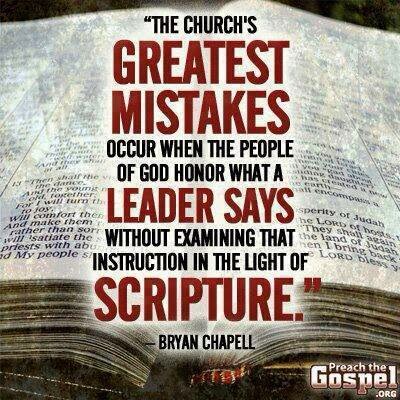 The majority may be wrong. We may be like lemmings, one leading all the others down the precipice. It beats me why lemming culture is so attractive. *

And to say, “We have never done it this way before” – as it goes against our tradition – is tantamount to closing our minds to what God wants to reveal to us and do through us.

But, alas, it’s so difficult to evict something so deeply entrenched in our minds that it becomes a stronghold (2 Corinthians 10:3-5).

“For though we walk in the flesh, we do not war according to the flesh. For the weapons of our warfare are not carnal but mighty in God for pulling down strongholds, casting down arguments and every high thing that exalts itself against the knowledge of God, bringing every thought into captivity to the obedience of Christ” (2 Corinthians 10:3-5).

Like a parachute, our mind works only when it is open.

Let us keep in mind this saying: “I disapprove of what you say, but I will defend to the death your right to say it.” – Voltaire.