Even if we have seed-sized faith, God can work miracles on our behalf.


What does Jesus mean when He says, "If you have faith like a grain of mustard seed, you will say to this mountain, ‘Move from here to there,’ and it will move?" 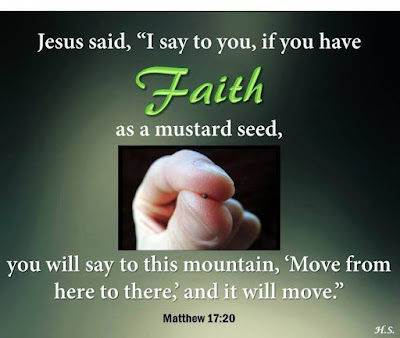 Jesus was summoned by his disciples to meet the needs of a desperate man. The latter had earlier sought the disciples to heal his son who was demon-possessed. But they could not help him (Mark 9:17-29).

The man was desperate as his son had been seized by recurrent episodes of epilepsy since childhood. Which father wouldn't be? Sometimes the demon would drive the boy to commit self–destructive acts such as casting himself into fire and water.

The father cried out, “Please have pity and help us if you can!”

Jesus replied, “Why do you say ‘if you can’? Anything is possible for someone who has faith!”

Right away the boy’s father shouted, “I do have faith! Please help me to have even more.
I believe; help my unbelief!” (Mark 9: 24).

In God’s scheme of working out the miraculous, the order is this: Believe first and then you will see.

Believe first. See later. Your feelings will catch up later with your faith. 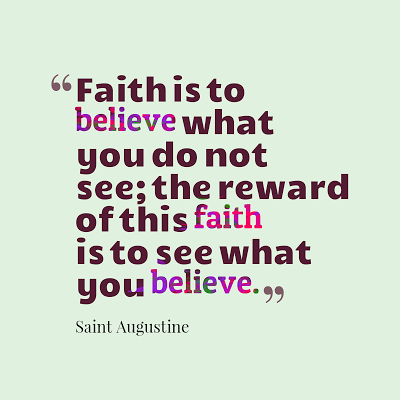 And when He had come into the house, His disciples asked Him privately, “Why could not we cast him out?” And He said unto them, “This kind can come forth by nothing but by prayer and fasting.”
(Mark 9: 28-29)

Notice the parallel passage in Matthew which gives us another perspective:
Then the disciples came to Jesus privately and said, “Why could we not cast it out?” He said to them, “Because of your little faith. For truly, I say to you, if you have faith like a grain of mustard seed, you will say to this mountain, ‘Move from here to there,’ and it will move, and nothing will be impossible for you.”
(Matthew 17: 19-20)

Juxtaposing the above parallel passages in Mark and Matthew, we can infer the following:
Does God ask for perfection from us before answering our prayers? No. Just remember this desperate father’s cry: “I believe; help my unbelief!” Did Jesus require perfect faith from him?

God answers us according to His will and our faith:
Finally, when we pray, we need to pray with expectancy. Pray believing that what we’re asking for will materialise.

In Acts 12:5, when Peter was imprisoned, the church earnestly prayed for him. But did they pray with expectancy? No. When Peter was miraculously set free from prison and came knocking at the door, only the maid, Rhoda, believed. The believers, despite having prayed from Peter’s release, could not believe that it was Peter at the door. They told the maid, “You are mad. It is his angel” (Acts 12: 15).

If Jesus heard the heart’s cry of the Canaanite woman (Matthew 15:21-28) and that of the centurion (Luke 7:1-10)—both of whom were not in the category of the elect—how will He not hear the cries of His elect?

And will not God grant justice to his chosen ones who cry to him day and night? Will he delay long in helping them? (Luke 18:7). 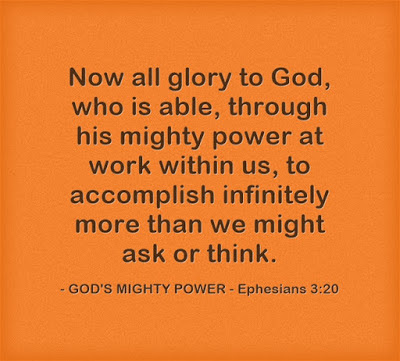 OVERCOMING CRISIS
Who or what do we turn to when crisis strikes? Where do we place our hope and trust?
http://bit.ly/1KkjyWP

FEAR NOT, STAND FIRM
When we face crisis, we need to realise that the battle belongs to God. We just need to stand firm in faith and act only at the appropriate moment.
http://bit.ly/1LlSmua

A lady lawyer’s amazing recovery from coma shows us that there is hope amid the worst of circumstances. Once again, it underscores the power of faith and intercession. God can do far more than what we might ask or think.

"Not one doctor who treated me while in hospital or subsequently any specialist that I have seen since, either in Hong Kong or later in Singapore, has been able to account for the speed of my recovery or that I was able to come back from that hopeless position at all.”

For the full story: http://www.straitstimes.com/singapore/lawyer-declared-brain-dead-wakes-up-after-calls-to-pull-plug-on-her?&utm_source=facebook&utm_medium=social-media&utm_campaign=addtoany

The above modern-day miracle challenges our notions of assisted dying. It reaffirms the fact that God alone has the prerogative to take life away—just as He is the giver of life—and men should not attempt to be gods.

“The decision to accelerate death is irreversible, and we may find out too late that it was made on the basis of erroneous assumptions—particularly as the full extent of brain damage might not be ascertainable whilst the patient is alive. There remains a lot which is not known about whether recorded mental activity or observable physiological responses can or cannot be equated to consciousness; about the possibility of cognitive recovery; and even about the likelihood of death. One of the landmark cases on accelerated dying in the US involved Karen Ann Quinlan, a 21-year-old woman who slipped into a coma after arriving home from a party. She suffered irreversible brain damage after experiencing an extended period of respiratory failure. The Quinlan family sought a court order for the patient's respirator to be removed, and the New Jersey Supreme Court ruled in their favour. It was thought that she would die once the respirator was removed but Karen Ann Quinlan surprised everyone by continuing to breathe unaided. She lived on in a PVS until her death almost a decade later.”
Extract from “Euthanasia: A matter of life or death?”
http://www.straitstimes.com/singapore/euthanasia-a-matter-of-life-or-death

In this time of fear
When prayer so often proves in vain
Hope seemed like the summer birds
Too swiftly flown away
Yet now I'm standing here
My heart's so full, I can't explain
Seeking faith and speaking words
I never thought I'd say

They don't always happen when you ask
And it's easy to give in to your fears
But when you're blinded by your pain
Can't see your way clear through the rain
A small, but still, resilient voice
Says help is very near