MAKING ALTAR CALLS: IS IT JUSTIFIED?

When Jesus preached the Sermon on the Mount or when He fed the multitudes, was there any indication in the Bible that He invited those who were believed in His message to come forward? No.

None who were serious in following Him were told to step forward to distinguish themselves from the rest. Nevertheless, He did call the twelve disciples individually to join His cause to change the world. 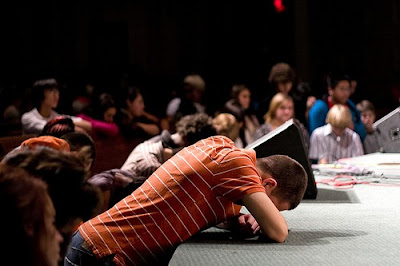 The disciples were personally challenged by Jesus to leave their trade and follow Him. Peter preached a powerful message at Pentecost, resulting in thousands streaming into God’s kingdom. And we are told that we must not be ashamed of Jesus, implying that we must publicly declare our faith and allegiance to Him. Even so, we cannot find an unequivocal argument for making altar calls. In fact, the Bible does not make a clear and convincing case for or against it.

While a speaker may be justified in making an altar call, he should not apply undue pressure to elicit a response. He should not employ gimmicks like stirring music or clever oratorical skills to push people to come forward. High pressure techniques akin to those used by sales personnel to close deals must be discouraged. If he does that, it reflects on his ego and dependence on natural ability. If he is really anointed, the Holy Spirit will definitely use his message to convict the audience. 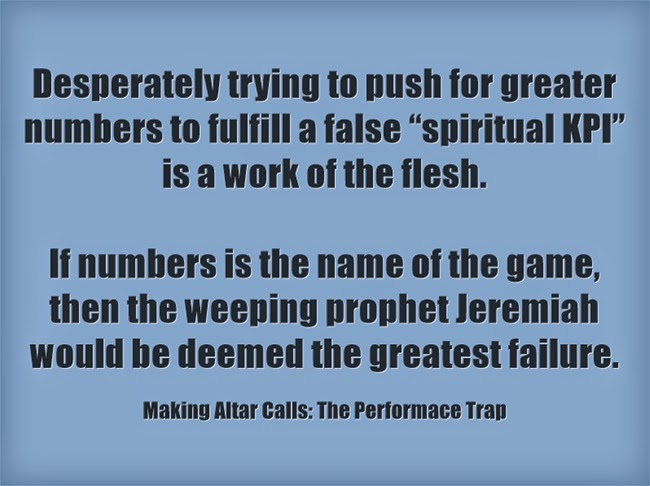 The speaker must be fully cognizant of his high calling, that he has been entrusted with the noble task of delivering the oracles of God and, for this reason, he cannot depend on his natural ability but on the power of the Holy Spirit (Ezra 7:10, 1 Peter 4:11, 1 Corinthians 2:1-5). Desperately trying to push for greater numbers to fulfill a false “spiritual KPI” is a work of the flesh.

Anyway, is getting great numbers to respond the ultimate test of success when it comes to delivering a message? The topic may be highly challenging (based on "hard sayings") or the audience may be hard-hearted and so the response may be muted. In these instances, the poor response cannot be attributed to the messenger's lack of oomph. If numbers is the name of the game, then the weeping prophet Jeremiah would be deemed the greatest failure. 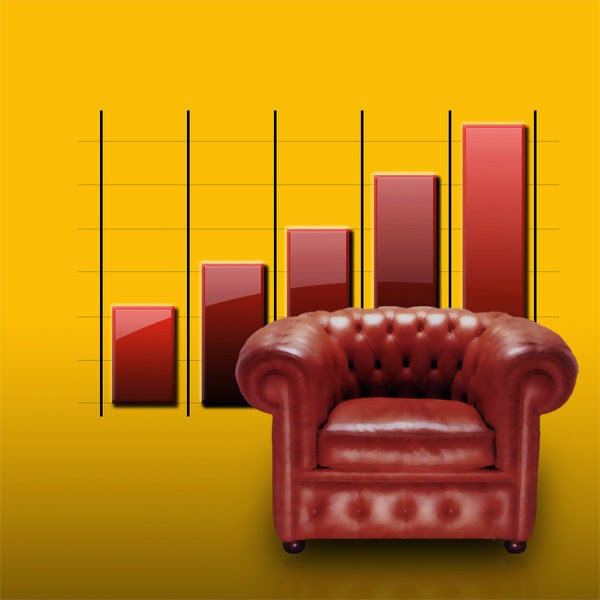 In summary, while there are no hard and fast rules concerning the making of altar calls, it may be advisable for the speaker to pose himself this question: "Am I doing this fully conscious of the guidance of the Holy Spirit or am I merely trying to play the numbers game in order to meet performance targets?"

For Ezra had prepared his heart to seek the Law of the Lord, and to do it, and to teach statutes and ordinances in Israel (Ezra 7:10).

If anyone speaks, let him speak as the oracles of God. If anyone ministers, let him do it as with the ability which God supplies, that in all things God may be glorified through Jesus Christ, to whom belong the glory and the dominion forever and ever (1 Peter 4:11).

And I, brethren, when I came to you, did not come with excellence of speech or of wisdom declaring to you the testimony of God. For I determined not to know anything among you except Jesus Christ and Him crucified. I was with you in weakness, in fear, and in much trembling. And my speech and my preaching were not with persuasive words of human wisdom, but in demonstration of the Spirit and of power, that your faith should not be in the wisdom of men but in the power of God (1 Corinthians 2:1-5).