FIVE MARKS OF AN AUTHENTIC DISCIPLE

How to distinguish between the important, non-negotiable characteristics of a disciple and the less significant traits.


Our fingers can serve as useful mnemonics to help us remember five important marks of a true disciple:

Thumb: This finger forms a stable grip with every other finger of the hand in order to pick up objects, an action called opposition. Thus, the thumb acts like a SERVANT of sorts, in touch with the needs of everyone else.

Index finger: This points the way, a fitting description for the WORD, a lamp to our feet, a light to our path (Psalm 119:105). It also tells us that teachers are to be honoured for they point the correct way for others to follow (1 Timothy 5:17, Ezra 7:10).

Middle finger: Because it is the longest of them all, it reaches out in LOVE to others, bears all things, and hopes all things (1 Corinthians 13:7).

Ring finger: A ring signifies a union between a man and woman in holy matrimony. What comes next after marriage? Children. So this finger is to remind us to be FRUITFUL. Not only bear fruit, but much fruit (Luke 8:8).

Little finger: This is the shortest and most diminutive. So it is a symbol of SELF-DENIAL. He must increase, I must decrease (John 3:30). 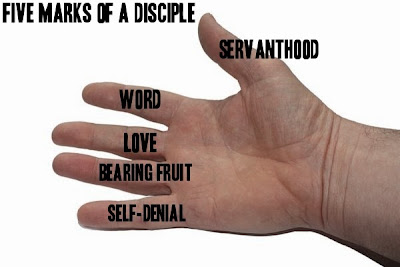 SERVANTHOOD
For even the Son of Man came not to be served but to serve others and to give his life as a ransom for many.
Mark 10: 45

FAITHFULNESS TO THE WORD
Jesus said to the people who believed in him, “You are truly my disciples if you remain faithful to my teachings. And you will know the truth, and the truth will set you free.
John 8: 31-32

LOVE
By this all people will know that you are my disciples, if you have love for one another.”
John 13:35

FRUITFULNESS
By this my Father is glorified, that you bear much fruit and so prove to be my disciples.
John 15:8

SELF-DENIAL
And he said to all, “If anyone would come after me, let him deny himself and take up his cross daily and follow me.
Luke 9: 23

Now that we are acquainted with the five important attributes of a disciple, what are the other qualities that are good to have but not so essential for a disciple?

Eloquence, charisma, magnetic personality, ability to perform miracles, interpersonal and relational skills are some of these helpful—and much sought after—but less critical qualities of a disciple.

A believer with all the thunder, "bells and whistles", crowd appeal and miracle working ability might eventually be shut out from heaven, being told “I never knew you”:

By the way, would we fault a believer if he or she is more like Mother Teresa, if she does not have the qualities found in charismatic leaders who are able to mesmerise the crowd and perform miracles?

Why do we continue to clap, cheer and absolve a leader who embezzles church funds just because he has charisma on stage? http://goo.gl/5tBN8S

Why do we put on a pedestal those qualities that pale into insignificance without the key element of love?

“And if I have prophetic powers, and understand all mysteries and all knowledge, and if I have all faith, so as to remove mountains, but have not love, I am nothing” (1 Corinthians 13:2).

Finally, what do you think is the true measure of a disciple? Is it based on his eloquence, public image or popularity as judged by the number of followers and ‘likes’ he gets on social media? Does it rest on how much anointing or power he has? Or how many spectacular miraculous feats he can perform? Are there not other important considerations such as character, intimacy with God, obedience, self-denial and faithfulness? The foregoing does not imply that charisma and spiritual gifts are unimportant. The moral of the story is that we must not put the cart before the horse. http://goo.gl/gTxXmP

WHAT TRULY MATTERS IN THE END
At the end of our lives when we stand before the judgment seat, what do you think are the qualities that matter most?
http://goo.gl/gTxXmP

CHARISMA vs. CHARACTER
Charisma may take us places but it takes character to keep us there or prevent us from falling. When we attain fame, fortune and power, will we be able to hold on to the values we once cherished as dear?
http://goo.gl/kt3qJJ

MARKS OF A LEADER
Leadership lessons gleaned from Nehemiah’s life—the six S’s
Imagine a “nobody” with the courage to lead a group of people to rebuild a city wall in a faraway land. Few among his peers—whether they were somebody or nobody—would ever dare attempt such a great exploit. That’s why Nehemiah, a king’s cupbearer, never fails to inspire me when the subject of leadership crops up.
http://goo.gl/jTHJ5L

FEET OF CLAY
As leaders are the key people who make or break an organisation, they certainly deserve our respect and support. But we should not “idolise” them to the extent we think they can do no wrong even in the face of glaring evidence to the contrary. Like all men, they too are weak and fallible.
http://goo.gl/5tBN8S
Posted by P A Lim at 02:01