THE THIEF IN THE NIGHT

Men’s greatest fear—inability to rise to the occasion.

Mr. Chan, a successful textile merchant, had all the trappings of success. He lived in an exclusive residential enclave, sported a brand new BMW and could afford to send his kids to college in the UK. His exceptional skill in wheeling and dealing had kept him ahead of the competition. Equipped with the latest state of the art security systems, his mansion seemed impregnable to intruders. Or so it seemed … until one day, an intruder came and stole that which he and his wife cherished so much—the joys of conjugal bliss. 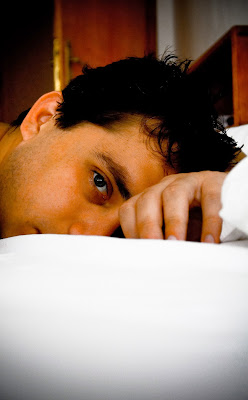 At first it was just some difficulty in achieving an erection but gradually it got worse. His zest for life disappeared. Sure, his business, his house, his wife and kids brought him fulfillment but life seemed incomplete. His confidence deflated, he found solace in the arms of other younger women; he thought that might do the trick as his wife seemed less attractive now after twenty years of marriage. Even so, his manhood still would not rise to the occasion. In quiet desperation, he searched for countless remedies (herbs, gadgets, injections), only to be met with promises that were as empty and flaccid as his organ. Soon he reasoned that life has much more to offer than just sex, so in resignation he plunged deeper into work.

Mr. Chan is not alone. Thousands of men in our country have resigned themselves to leading bland sexless lives because of this silent thief in the night called Erectile Dysfunction (ED), a medical term for the inability to achieve or maintain an erection sufficient for satisfactory sexual performance. In a recent survey involving 351 men above 50 in Subang Jaya, the self-reported incidence of ED was an astounding 71% (1). Similar figures were found in Penang (2).

While the snatch thief targets vulnerable women clutching handbags, ED often targets macho successful men in the prime of life (though ageing males are more vulnerable). It makes no distinction between tycoons or pauper—none is exempt. Hence the major problem in our society is not just snatch thieves!

In ED, the tiny arteries supplying blood to the penis become “stiff”, unable to dilate fully (endothelial dysfunction) to accommodate the increased blood flow needed to trigger an erection when a man is sexually aroused. In addition, progressive layering of fats and cholesterol within the arteries over the years further compromises the vital blood supply.

What many fail to realise is that ED shares the same underlying cause as chronic diseases like hypertension, heart disease, diabetes or stroke: endothelial dysfunction and layering of fats. Patients with the chronic diseases mentioned above often have ED as well. In fact this thief in the night is like a “Robin Hood” (a good guy) because ED blows the whistle on other more sinister events. ED typically precedes the first signs of a heart attack by two years because the arteries supplying the penis, being much smaller, get affected first before the ones supplying the heart. If a man seeks medical attention for ED, he might get his heart checked as well. Hence ED alerts the patient to heart disease and may preempt a heart attack two years in advance.

Men with problems relating to their wives are also prone to ED as it is not possible to have good sex in a bad marriage. Resentment can dampen a man’s sexual ardour. These relational elements are so powerful that I have even seen men fail to respond to the most powerful drugs for ED. Sex in the beginning (Genesis 2), as designed by the Maker, was meant to be a blissful “one flesh” experience where the couple were both naked and unashamed, completely transparent to each other and willing to accept each other fully. I guess sex will never be as good after the Fall as sin has entered into and marred many marriages.

Men with past injuries like pelvic fracture or surgery to their pelvic organs which severs the nerve supply to their penis become victims of ED. Those who smoke, consume excessive alcohol and take certain prescription drugs for hypertension are more likely to have ED.

Finally, as men age, their testosterone (male hormone) level declines, sparking off a host of symptoms: loss of sexual desire, insomnia, lethargy, less hard erection and finally complete inability to have an erection. Testosterone, which also drives sexual desire, is vital for erection. But these symptoms are treatable and reversible after hormonal replacement together with an accurate assessment.

ED wreaks great havoc to marriages—psychological and spiritually. Men’s ego is often tied to the quality of their erections; even the occasional failure results in feelings of inadequacy and loss of confidence. When he attempts sex, the spectre of his past failure raises its ugly head and weighs down on him. If he fails to get a satisfactory erection, his self-doubt and worst fears would be confirmed. The emotional trauma of this failure creates a vicious cycle which jeopardises successful erections in future. In sexual counselling, this cycle must be broken for healing to occur.

The sidekick to ED is Premature Ejaculation (PE) whereby, in his anxiety to secure an erection, the man over-compensates: He forgets how to delay his ejaculation because he concentrates so much in getting his much sought-after erection. Men with PE typically fire off in less than a minute!

Increasingly frustrated, the man with ED will find excuses not to have sex with his spouse because each attempt forces him to confront his inadequacy when he falls flat on his pants before his unimpressed wife. I have come across some men who pick fights with their wives in order to avoid sex. One patient of mine even called his drop-dead beautiful wife “fat” to avoid shouldering the blame for being unable to give pleasure to his wife.

The hapless wife, on the other hand, either suffers in silence or is secretly celebrating her freedom from sex (conjugal duties) which she never really cared about anyway. A recent study showed one in three women in KL suffer from some type of sexual dysfunction (orgasmic or arousal disorders, or plain dissatisfaction) (3). So the problem of ED can be compounded.

Some women, thinking he is “expending his ammunition” elsewhere but not at home, might even respond by aggressively demanding sex. However, others may pressure their husbands to seek medical attention for fear of underlying disease.

For all its detrimental effects in society, ED is not unstoppable. It can be beaten. In fact, almost everyone who has ED will be able to overcome it with proper counselling and medical intervention. I believe sex is vital to the health and well-being of a couple no matter how old they are because God meant for us to celebrate sex within marriage.

Let your wife be a fountain of blessing for you.
Rejoice in the wife of your youth.
She is a loving deer, a graceful doe.
Let her breasts satisfy you always.
May you always be captivated by her love.


The above article was first published in Asian Beacon magazine, August 2009, issue 41.4

Dr Peter Ng, a Consultant Urological Surgeon in private practice, is the President of the Continence Foundation of Malaysia. He is also a lay preacher at the First Baptist Church, Petaling Jaya.

The following posts are by Lim Poh Ann.

Personal differences and external forces may trigger marital conflict. Understanding the underlying dynamics behind these two factors is often the first step towards conflict resolution.

Singles and married couples alike will learn valuable lessons as they witness the reconciliation of two broken people in the movie, "FIREPROOF".

‘USE AND THROW’ MENTALITY

In these days when we're accustomed to a "use and throw" mentality — what with the advent of styrofoam boxes for food takeaways—commitment in a marriage is becoming a rare commodity.