How do we overcome the giants—whether real or imaginary—in our lives?

Before the Israelites were able to possess the Promised Land and enjoy its blessings, they had to conquer their own fears.

Ten of the spies reported that the land flowed with milk and honey. But they also saw the obstacles—the fortified cities and giants who were descendants of Anak. “We seemed like grasshoppers in our own eyes and we looked the same to them” (Numbers 13:33). So they cringed in fear and defeat.

But the other spies, Caleb and Joshua, belonged to the “we can do it” category. Not that they were great in their own strength. They rested in God’s promises that He will give them the Promised Land (Exodus 3:17) and believed that God will empower them to possess it (Numbers 13:30, 14: 24).

Having the right estimate of ourselves is so important—too high an estimate smacks of pride whereas too low an estimate is not only detrimental to our self-image but causes us to shrink back from the assignments God has appointed for us.

Indeed, we need to know our identity—how God sees us—step out in faith and act. 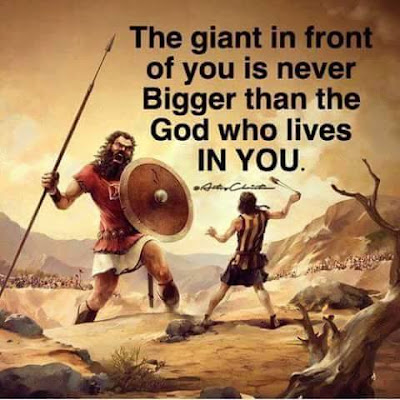 Saul and all the Israelites were dismayed and terrified by the threat of the thundering Philistine giant, Goliath, who taunted God’s people to meet him in a face-off.

However, David, a mere shepherd boy—because He had a personal relationship with God which built his self-esteem—stood out from the rest to confront the giant.

David cried out to the Philistine, “You come against me with sword and spear and javelin, but I come against you in the name of the Lord Almighty, the God of the armies of Israel, whom you have defied” (1 Samuel 17: 45).

Refusing the armour suggested by Saul, David went into battle, defeating Goliath with a sling and a few stones.

Sometimes the “giants” that we conjure up are more a matter of a perception—imaginary rather than real. Such was the case of Gideon who had a poor self-image. He saw himself as coming from the weakest clan and as the least among his family members (Judges 6: 15). Resigned to his fate that he was powerless against the Midianites who had occupied his nation, he was threshing wheat when the angel of God gave him a tremendous boost to his morale: “The LORD is with you, you mighty man of valour" (Judges 6:12). He then went on to lead an army to defeat his enemies.

Whether the giants in our lives are real or imaginary, we can slay them if we:


The last book of the Bible ends with a sombre note. Notice that the cowardly are lumped in the same category as those who commit graver sins.

“All who are victorious will inherit all these blessings, and I will be their God, and they will be my children. But cowards, unbelievers, the corrupt, murderers, the immoral, those who practice witchcraft, idol worshipers, and all liars—their fate is in the fiery lake of burning sulfur. This is the second death” (Revelation 21:7-8).

Let’s be bold and courageous—slay the “giants” that prevent us from possessing the Promised Land and embrace the fullness of our inheritance in Christ. Let’s rise up to the challenge and step into our destiny. For we are more than conquerors though Christ!

STEPPING INTO OUR DESTINY
When we step out by faith to embrace God’s calling, we need to focus on His promises rather than obstacles.
http://bit.ly/1dNQSbc

ENTERING HIS REST
What does entering Christ’s rest mean?
http://bit.ly/1fVBxDY
Posted by P A Lim at 01:20