When satan puts negative, discouraging or destructive thoughts in our minds, it’s time to declare God’s word to counter his lies. Not knowing the truth is disastrous. Be prepared. Be equipped. 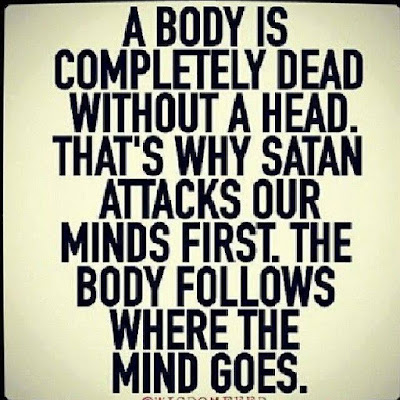 Pic Source: The Cornerstone
How did Jesus overcome the wiles of the devil when He was tempted in the wilderness?

When Jesus was tempted in the wilderness, he drew the Sword of the Spirit to fight against the wiles of the devil. Physically he was at His weakest moment after a forty-day fast when Satan tempted Him (Matthew 4:1-11).


For each of Satan’s attempts, Jesus overcame the attacker with the Word of God. Jesus rebuked Satan by quoting three times from the book of Deuteronomy:


The Word available to Jesus in His time was just the Old Testament. So He dug deep into His knowledge of the Word of that era. Even as a boy He had a firm grasp of the Word. His parents found him sitting in the temple, learning from the teachers and asking them questions (Luke 2:46). He had the word literally at His fingertips as He could interpret, beginning with Moses and all the prophets, all the scriptural references alluding to Him. This happened after His resurrection when Jesus joined in a conversation with two believers who were walking on the road to Emmaus (Luke 24:25-27).

Among the tools at our disposal for spiritual warfare, the weapons of offense are the Sword of the Spirit and prayer. The helmet, breastplate and shield are merely protective (Ephesians 6:10-18).

Of course, it is not head knowledge of the Word which will stand us in good stead against the devil. We also need to be in a right relationship with God, “having girded our loins with truth and having put on the breastplate of righteousness” (Ephesians 6:14).The saints defeat the devil by the blood of the Lamb and by their testimony. None can testify with conviction and power unless they are righteous before God, having been cleansed by the blood of the Lamb (Revelation 12:11). 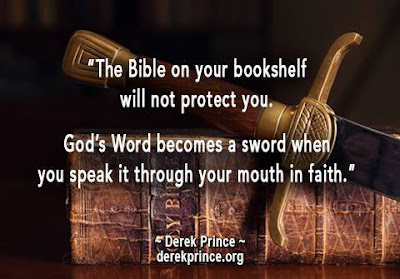 We need to bear in mind that Satan can even quote scripture in the second temptation: “Throw yourself down and God will send angels to bear you up.” But Jesus stood firm against Satan's suggestion by saying, "You must not test the Lord your God."

We must not only be imbued with the Word in our hearts and minds but must also know how to “rightly handle” the Word. We must know the Word in its entirety, not allowing Satan to use half-truths and twist scriptures to suit his devices: “Study to show thyself approved unto God, a workman that needeth not to be ashamed, rightly dividing the word of truth” (2 Timothy 2:15) KJV. If the devil quotes, “It is written …” we must rebuke him by saying, “It is also written ...”

These temptations of Jesus happened before He embarked on His ministry. Even so, we have to be proven faithful before we are called to do God’s work. Like Joseph, we have to demonstrate our capacity in overcoming temptation and trials before we are bestowed the honour to serve Him.

Jesus knew exactly how to wield Sword of the Spirit when He faced each temptation of the devil. If Jesus needed the Word to be victorious against temptation, how much more we, weak mortals, need to be well-equipped with knowledge and understanding of scriptures.

May we be ever ready for battle against the enemy. May we know how to draw the Sword of the Spirit when temptation strikes.

Footnotes:
The temptation of Jesus in the wilderness (Matthew 4:1-11):

Then Jesus was led by the Spirit into the wilderness to be tempted by the devil. After fasting forty days and forty nights,he was hungry.

The tempter came to him and said, “If you are the Son of God, tell these stones to become bread.”
Jesus answered, “It is written: ‘Man shall not live on bread alone, but on every word that comes from the mouth of God.’”

Then the devil took him to the holy city and had him stand on the highest point of the temple. “If you are the Son of God,” he said, “throw yourself down. For it is written:
“‘He will command his angels concerning you,
and they will lift you up in their hands,
so that you will not strike your foot against a stone.’”
Jesus answered him, “It is also written: ‘Do not put the Lord your God to the test.’”

Again, the devil took him to a very high mountain and showed him all the kingdoms of the world and their splendor. “All this I will give you,” he said, “if you will bow down and worship me.”
Jesus said to him, “Away from me, Satan! For it is written: ‘Worship the Lord your God, and serve him only.’”

Then the devil left him, and angels came and attended him.