Nothing happens by chance in the grand scheme of God’s plan for our lives. There is nothing improper about staying in the marketplace and making an impact there. 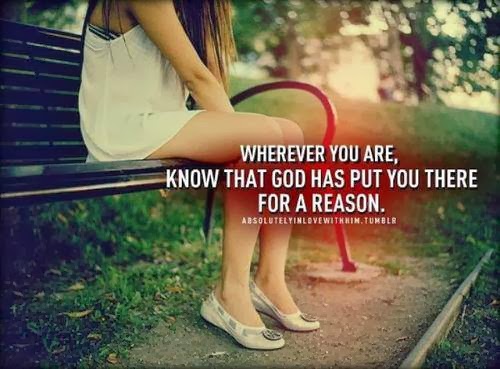 The little boy slew Goliath. And the rest is history. Later God promoted him to become king: From tending sheep to ruling a nation; from fighting off animals to leading the nation’s army against its enemies. The training he received as a shepherd was put to good use.

Similarly, Jesus called Peter, Andrew, James and John, who were all fishermen, to follow Him. The Master transformed their skills; they who used to catch fish were taught how to fish for men.

It is tempting for the Jewish exiles in Babylon to believe what the false prophets had told them – that they would be speedily relocated back to their homeland. God, however, told them through the prophet Jeremiah that they were to stay put in foreign soil for 70 years and plant their roots there:

“Build houses and settle down; plant gardens and eat what they produce. Marry and have sons and daughters; find wives for your sons and give your daughters in marriage, so that they too may have sons and daughters. Increase in number there; do not decrease. Seek the peace and prosperity of the city to which I have carried you into exile. Pray to God for it, because if it prospers, you too will prosper” (Jeremiah 29:5-7).

God’s plan and its timing were so different from that of man’s: “For I know the plans I have for you,” declares the Lord, “plans to prosper you and not to harm you, plans to give you hope and a future” (Jeremiah 29:11).

In effect, God was saying: “You don’t have to teach me what to do. The agenda which I have planned for you is best for your welfare and its timing is perfect.”

Marketplace believers need to embrace their “calling” positively. We need to recognise the fact that we’ve been placed there by God to make a difference in the world.

If we are positioned by God to be in the marketplace, we need not fret: Don’t hanker for a seemingly more “spiritual” position in church or a Christian NGO.

Paul taught the principle of status quo — that everyone is to remain in the same occupation he was in when he was converted (1 Corinthians 7:17, 20, 24). True religion does not seek to disrupt social order. *

The call to be “separate from the world” (2 Corinthians 6:17) does not require us to withdraw ourselves physically from the marketplace to be in the company of believers. Otherwise how can we function as “salt” to slow down the process of decay in the world? Rather, it is a call to see ourselves as a chosen people who have been changed from within. We are in the world, but not of the world (1 Peter 2:9).

Whether we’re holding a humble position, like Nehemiah, or in a leadership role, like Joseph, we can make a difference in the marketplace. Both of them served kings who professed alien religious beliefs and customs. But they remained pure in a foreign land, found favour in the kings’ eyes and did great exploits for God. Nehemiah rebuilt the walls of Jerusalem while Joseph averted a famine, thus saving his people and the Egyptians.

With a renewed mindset and the empowering of the Holy Spirit, we too can be agents of change in the marketplace.

“Nevertheless, each person should live as a believer in whatever situation the Lord has assigned to them, just as God has called them. This is the rule I lay down in all the churches” (1 Corinthians 7:17).

“Each person should remain in the situation they were in when God called them” (1 Corinthians 7:20).

“Brothers and sisters, each person, as responsible to God, should remain in the situation they were in when God called them” (1 Corinthians 7:24).

However, Paul’s declaration is to be taken in a general sense, and not without qualification. It does not forbid the believer from making a change in his profession if he is convicted God may be calling him into a different field, be it in full-time ministry or the marketplace. If he has an intimate relationship with Him, he will come to know of God’s will — God will confide in him, treating him as a friend (John 15:15, Psalms 25:14).
Posted by P A Lim at 01:07