Discover why less may be more in our highly connected world. A Christian perspective of social networking.

Has Linda accepted my request to be her friend? Has anyone commented on my latest status update? Such nagging questions would drive Jack – like millions all over the world – to repeatedly check his Facebook account at work and at play.
When Mark Zuckerberg  founded Facebook in 2004 with fellow students, he had no idea it would take the world by storm. Back then it was merely to connect Harvard students. Today, with 845 million active users to date, Facebook is the most used social networking service in the world. 1
Thanks to social media and mobile technologies, we are incredibly well connected. But how connected are we to the significant people and things in life? What should be the believer’s attitude towards social media? Can the timeless truths found in the Bible shed some light on these issues?
Neutral
No doubt Facebook has many positive attributes. We can connect with long lost friends or relatives. We can share common interests or join various support groups. Stroke victims or mothers of autistic children can find help through the latter. Prayer items can be shared within a community and needs met.

By uploading pictures of our mission trip or recounting how God heals or provides, we can encourage others. Parents and teachers can keep in touch with their children and students, respectively. We can also engage the spiritually hungry in their quest for God (but be tactful and not shove our beliefs down their throats).

Facebook has proven itself as a rallying point for social and political change. It can also galvanise communities into action during natural disasters, garnering financial support for the victims.
Social networking sites have become important online sources for people to learn about products and services. Recognising its potential, companies use Facebook as an effective, low-cost marketing tool.
Facebook is neutral. Like fire, which can cook us a meal or destroy our home, Facebook is a merely a tool. It can be used either for good or evil.

By all means explore and utilise all the benefits of Facebook. But reject anything negative, such as using it to post humiliating, demeaning comments or pictures. And beware of the potential danger posed by online liaisons with members of the opposite sex.

While it’s cool to stay connected on Facebook, it’s even more important to relate to people in the real world. Preferring meeting people to distance communication, the apostle John penned:  “I have much to write to you, but I do not want to use paper and ink. Instead, I hope to visit you and talk with you face to face, so that our joy may be complete (2 John 1:12). Jesus built bridges with others over a meal. He dined often with common folks and his disciples.

Openness
“Hey, I have many friends now!” Even those who are shy can express themselves through Facebook. Openness in sharing generates interest and hence many friends.

Being open, however, is not necessarily positive. We need to realise that whatever we share on Facebook is permanent and probably accessible to more people than we can imagine, including employers and stalkers. Sometimes it’s better to share something in private with a trusted friend. We can’t be sure about the trustworthiness of our Facebook “friends”. They might just tell the whole world.

We need to prayerfully consider what we share on Facebook. There are no hard-and-fast rules. First, do we need to broadcast it to the world? Do our Facebook pictures or postings smack of pride or narcissism on our part? Being too open also carries with it security risks as criminals may capitalise on our gullibility (Matthew 10:16).

Knowing what not to post on Facebook is crucial. Among other things, we should not reveal our address, vacation plans, mother’s maiden name, children’s names and search profile.
When Mary was told by an angel she had found divine favour (as she had been chosen to bear Jesus), she “kept all these things in her heart and thought about them often” (Luke 2:19).

Gatekeeper
Would you rather snuggle up with a life-changing book or spend your time on Facebook? Would you rather meet an extraordinary person (leader or mentor) in flesh and blood for half an hour or spend hours with your Facebook friends?  It all depends. There are no pat answers; personal preferences are diverse.
Nevertheless, it’s wise to consider what Charlie “Tremendous” Jones, an  accomplished speaker and writer, said: "You are the same today as you’ll be in five years except for two things, the books you read and the people you meet."
As we feed our minds on the Bible and other inspirational books, we’ll definitely not be the same again. The company of a man of God – whose virtue just oozes out through his speech and behaviour – is to be cherished even it is for a brief moment.
In a sense, we are all gatekeepers. Like sentinels, we keep watch over what we view, hear and think about. We need to spend more time on the “Faith Book” (Bible) and less on Facebook. If we spend a disproportionate amount of time on Facebook rather than on wisdom needed for personal growth, we will be spiritually poor (Hosea 4:6).
So we need to guard our hearts above anything else because it determines the kind of life we will live. In other words, be careful how we think; our life is shaped by our thoughts (Proverbs 4:23).

Do we tend our mind like a garden, sowing the positive and weeding the negative?

Hooked on trivia
It’s exciting to check out our friends’ recent Mauritius getaway on Facebook. We love to view postings about their dining experience in the fancy nightspots in town. Undeniably, it’s a relaxing pursuit. However, when carried to the extreme, it can become an addiction. What starts off as a fad can lead to FAD (Facebook Addiction Disorder).
A neuro-psychologist, Dr Nivashinie Mohan of Gleneagles Hospital, Kuala Lumpur, said that “FAD continues to go undetected because most addicts do not realise or want to admit that they have a problem.” (The Star, headlines, January 20, 2012).
Come on let’s face it. How many hours do we have in day? For many, sleep takes at least six to eight hours, commuting two hours, working at least eight hours, attending to our personal needs (such as eating and bathing) at least one hour. Whatever precious time left in a day – which should be spent with our family, on personal devotion or social interaction in the real world – is whittled away by social networking.
Time flies when we’re engrossed in front of the computer – and how often it is spent on trivia. “Everything is wearisome beyond description. No matter how much we see, we are never satisfied. No matter how much we hear, we are not content” (Ecclesiastes 1:8).
And if we get sucked into gossip and slander or view that which is obscene, we slide further into the gutter. We should instead be making the best use of our time because the days are evil (Ephesians 5:16). 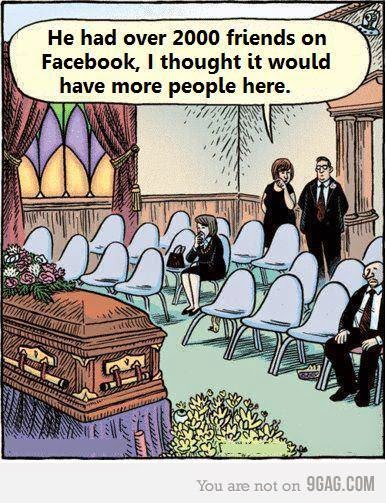 Connected to the Significant
Our feet have to be firmly planted in the real world and our “spiritual antennae” tuned in to God’s frequency 2 as we go surfing in cyberspace.
Embracing the positive aspects of social networking does not necessarily mean we have to spend hours glued to the screen. By setting healthy limits to social media, we free up valuable time for significant things and people.
Ironically, in a highly connected world, less may be more. We don’t need to be connected all the time – as long as we’re connected to what really matters.
Wisdom is superior to knowledge even in this age of high mobility and information overload. 3 May we not lose sight of our destiny and purpose in life or fail to nurture friendships on a face-to-face basis.

1  Social networking is not confined to Facebook. Other sites include Twitter , YouTube, Myspace, etc.
2  Solid grounding in scripture and keen sensitivity to the Holy Spirit.
3  “Those who are wise will shine as bright as the sky, and those who lead many to righteousness will shine like the stars forever. But you, Daniel, keep this prophecy a secret; seal up the book until the time of the end, when many will rush here and there, and knowledge will increase ” (Daniel 12:3-4).

Dr Lim Poh Ann was formerly the editor of Asian Beacon (December 2008 to October 2011). He believes that the Bible is still relevant in this highly connected and sophisticated world because its truths are timeless.
The above article appeared in the June-July 2012 issue of Asian Beacon whose theme was The Social Media Storm.
Posted by P A Lim at 01:31