DID CHRIST BECOME POOR SO THAT WE CAN BECOME RICH? 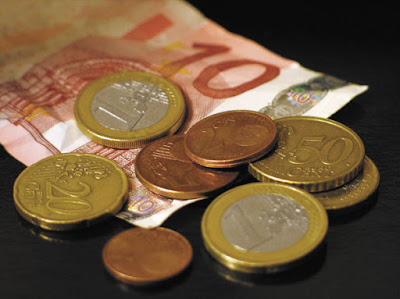 The sinless Christ bore the sins of man at the cross, thus enabling believers to be made righteous (2 Corinthians 5:21).

Christ also became a curse on the cross so that believers might receive the blessings God promised to Abraham (Galatians 3:13-14).

As an extension of this exchange principle, can we conclude that Jesus became poor so that we might become rich? 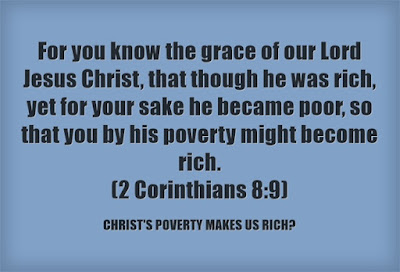 Some say that Christ became poor so that we might become rich in terms of material wealth. Their understanding is based on this verse: For you know the grace of our Lord Jesus Christ, that though he was rich, yet for your sake he became poor, so that you by his poverty might become rich (2 Corinthians 8:9).

But it's dangerous when we pluck a verse out of context to support what seems to be a ‘feel good’ prosperity gospel. http://bit.ly/T710Ty

The following is an attempt to refute such thinking:

In 2 Corinthians chapter 8, the apostle Paul was encouraging the believers at Corinth to excel in the area of giving. The context here is the subject of giving, why the haves should give to the have nots.

What better example of self-sacrifice is there than Jesus—whom Paul quotes—who set aside His divine privileges, glory and power when He came down to earth.

Jesus became “poor” by setting aside is His glory and power. It does not refer to material riches. Consequently, we become spiritually rich when we believe in Jesus for we are saved from the penalty of sin, get to enjoy a relationship with God now and later gain access to heaven when we die.

As a man, He was subject to place, time and many other limitations. He did not give up His divinity but He set it aside for the sake of man—that man might be saved through his death at the cross.

This verse, 2 Corinthians 8:9, should be correlated with the passage in Philippians 2:5-7—how Jesus, being the supreme example of humility, set aside His divinity when He became man. He did not give up His deity; he was fully man and fully God when He walked on this earth. http://goo.gl/yxmxge

While it is true to say the blessings of Abraham upon believers include material wealth, we must not get carried away and get entrapped by a desire to be wealthy. http://bit.ly/WGbjZE

“But those who desire to be rich fall into temptation, into a snare, into many senseless and harmful desires that plunge people into ruin and destruction. For the love of money is a root of all kinds of evils. It is through this craving that some have wandered away from the faith and pierced themselves with many pangs” (1 Timothy 6: 9-10). 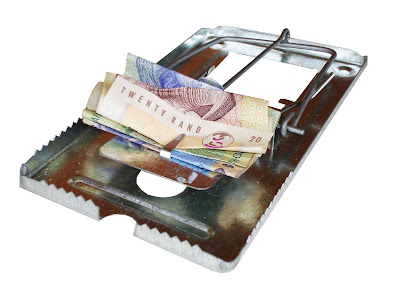 Balance is needed when we approach the touchy subject of prosperity. On one hand, we must not think that poverty is a virtue. On the other hand, we must not be mesmerised by money. Those who are wealthy need to be humble and understand that true riches are not found in the here and now.

“As for the rich in this present age, charge them not to be haughty, nor to set their hopes on the uncertainty of riches, but on God, who richly provides us with everything to enjoy. They are to do good, to be rich in good works, to be generous and ready to share, thus storing up treasure for themselves as a good foundation for the future, so that they may take hold of that which is truly life” (1 Timothy 6:17-19).

MONEY: ROOT OF ALL EVIL?
Is money the root of all evil? Or is it the love or the lack of money which drives people to commit all kinds of evil?
http://goo.gl/Uk0GDO

PROMISE OF PROSPERITY?
Is it God’s will to prosper all who place their faith in Him?
Among the various points advanced by proponents of the prosperity gospel is this greeting by the apostle John: “Beloved, I pray that in all respects you may prosper and be in good health, just as your soul prospers” (3 John 1:2).
http://goo.gl/U2DGub

For a full exposition of 2 Corinthians 8:9, please check out “THE POVERTY THAT MADE US RICH” by John MacArthur:  http://www.gty.org/.../47-59/the-poverty-that-made-us-rich

THE BURDEN
One Sunday morning, a wealthy man sat in his balcony enjoying sunshine and his coffee when a little ant caught his eye which was going from one side to the other side of the balcony carrying a big leaf several times more than its size. The man watched it for more than an hour. He saw that the ant faced many impediments during its journey, paused, took a diversion and then continued towards destination. At one point the tiny creature came across a crack in the floor. It paused... for a little while, analyzed and then laid the huge leaf over the crack, walked over the leaf, picked the leaf on the other side then continued its journey.
The man was captivated by the cleverness of the ant, one of God’s tiniest creatures. The incident left the man in awe and forced him to contemplate over the miracle of Creation. It showed the greatness of the Creator. In front of his eyes there was this tiny creature of God, lacking in size yet equipped with a brain to analyze, contemplate, reason, explore, discover and overcome. Along with all these capabilities, the man also noticed that this tiny creature shared some human shortcomings.
The man saw about an hour later the creature had reached its destination – a tiny hole in the floor which was entrance to its underground dwelling. And it was at this point that the ant’s shortcoming that it shared with the man was revealed. How could the ant carry into the tiny hole the large leaf that it had managed to carefully bring to the destination? It simply couldn’t…!
So the tiny creature, after all the painstaking and hard work and exercising great skills, overcoming all the difficulties along the way, just left behind the large leaf and went home empty-handed. The ant had not thought about the end before it began its challenging journey and in the end the large leaf was nothing more than a burden to it. The creature had no option, but to leave it behind to reach its destination. The man learned a great lesson that day.
Isn’t that the truth about our lives? We worry about our family, we worry about our job, we worry about how to earn more money, we worry about where we should live – 5 bedroom or 6 bedroom house, what kind of vehicle to buy – a Mercedes or BMW or a Porsche, what kind of dresses to wear, all sorts of things, only to abandon all these things when we reach our destination – The Grave. We don’t realize in our life’s journey that these are just burdens that we are carrying with utmost care and fear of losing them, only to find that at the end they are useless and we can’t take them with us.

For our sake he made him to be sin who knew no sin, so that in him we might become the righteousness of God (2 Corinthians 5:21).

But Christ has rescued us from the curse pronounced by the law. When he was hung on the cross, he took upon himself the curse for our wrongdoing. For it is written in the Scriptures, “Cursed is everyone who is hung on a tree.” Through Christ Jesus, God has blessed the Gentiles with the same blessing he promised to Abraham, so that we who are believers might receive the promised Holy Spirit through faith (Galatians 3:13-14).
Posted by P A Lim at 23:07 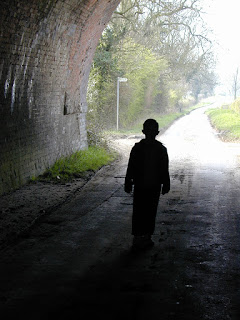