Early warnings of typhoons and hurricanes, if heeded, may prevent unnecessary loss of lives. Similarly, warnings in scripture are positive if heeded; they are meant for the spiritual well-being and eternal security of believers. 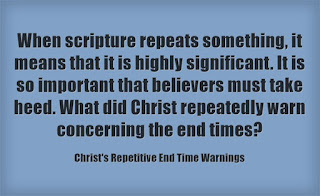 When scripture repeats something, it means that it is highly significant. It has to be repeated lest we forget or adopt a laissez faire attitude towards it. It is so important that believers must take heed.

What did Christ repeatedly warn concerning the end times?

Be aware, be warned. It’s already here. We should wise up by preparing ourselves against deception. Jesus warned that deception will be a prominent feature during the end times (Olivet Discourse, Matthew 24).

Believers have to be wise—in fact, extremely vigilant and discerning—if they want to stand up against deception in these last days.

Of the various end time characteristics—deception, persecution and turbulent times—mentioned by Jesus in the Olivet Discourse, deception seems to be the most prominent. Even supposedly mature leaders can be deceived. If they can be deceived, don’t you think the flock will fare even worse?

In fact, in Matthew 24, Jesus warned believers to be wary of deception not once but four times:
Similarly, the other writers of the Synoptic Gospels also warned against deception:
Christ's strong warnings against deception are reflected in the teachings of the apostles Paul, Peter and John. They all took a firm stand against destructive heresies (2 Corinthians 11:3; 2 Peter 2:1; 1 John 4:1). 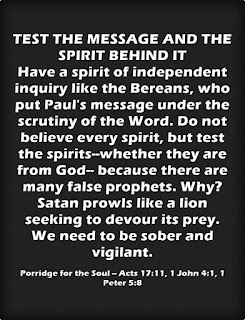 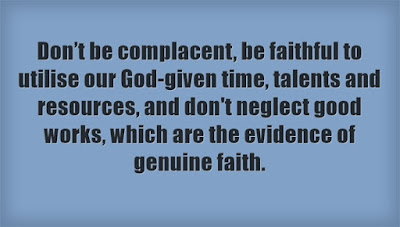 Christ compared a believer to a steward placed in charge of a master’s household. If the steward was faithful, he would be richly rewarded upon the master's return.

“Who then is the faithful and wise servant, whom his master has set over his household, to give them their food at the proper time? Blessed is that servant whom his master will find so doing when he comes. Truly, I say to you, he will set him over all his possessions” (Matthew 24: 45-47).

Like how the master dealt with the steward, He will hold us accountable if we do not fulfil the task He has given us. If God’s servants are complacent and irresponsible, they will be punished when the Master (Christ) comes back unexpectedly.

“But if that wicked servant says to himself, ‘My master is delayed,’ and begins to beat his fellow servants and eats and drinks with drunkards, the master of that servant will come on a day when he does not expect him and at an hour he does not know and will cut him in pieces and put him with the hypocrites. In that place, there will be weeping and gnashing of teeth” (Matthew 24: 48-51).

A similar warning is found in the Parable of the Talents (Matthew 25: 14-30). The moral of the teaching here is that believers ought to wisely utilise our time, talents and resources to advance God’s kingdom. The one-talent man, who buried his talent, was condemned and sent to the outer darkness, a place of weeping and gnashing of teeth.

This danger of careless complacency is emphasised in the Parable of the Ten Virgins where the foolish virgins were excluded from heaven as they did not have sufficient oil in their lamps (Matthew 25: 1-13).

The importance of good works is highlighted in the final judgment (Matthew 25: 31-46) when Christ will separate  ***   the sheep (genuine believers) from the goats. The sheep are those whose lives are evidenced by good works—done “as unto Christ”.

Even if we fail to appreciate Christ’s warning in the first account (steward must be responsible for his master’s household), the message will soon be apparent to us as Christ repeated it in the Parable of the Ten Virgins, Parable of the Talents and the final judgment when the sheep will be separated from the goats.

Liberal teaching tells us that believers saved by grace merely need to rest in Christ’s imputed righteousness; God will always see us as righteous, He will not point out our faults or convict us of sin. But the truth is …

The message is loud and clear: Don’t be complacent, be faithful to utilise our God-given time, talents and resources, and do not neglect good works, which are the evidence of genuine faith. 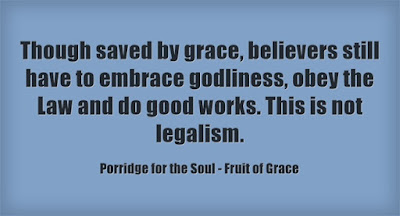 ENDURE TILL THE END

In the Olivet Discourse, Jesus warned true believers that they have to endure end time persecution, deception and lawlessness in order that they might be saved.

“Then they will deliver you up to tribulation and kill you, and you will be hated by all nations for My name’s sake. And then many will be offended, will betray one another, and will hate one another. Then many false prophets will rise up and deceive many. And because lawlessness will abound, the love of many will grow cold. But he who endures to the end shall be saved."
(Matthew 24:9-13) 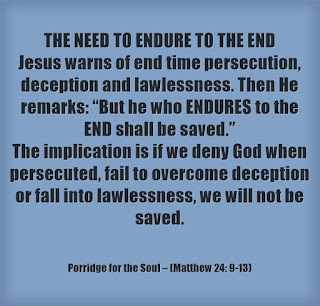 Christ’s end times warning to endure—and persevere in the faith—is repeated elsewhere in the Gospels:
Notice that John—the writer who is distinct from the writers of the Synoptic Gospels (Matthew, Mark and Luke)—recorded in Revelation so many instances about the need to overcome before believers can inherit eternal life.
What the foregoing implies is that believers who overcome will get to inherit eternal life; those who fail to overcome will have their names blotted out from the book of life. Sounds harsh? But it is the truth. 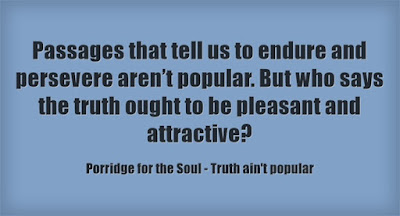 In conclusion, Christ warned many times that believers have to:
Christ’s end time warnings are so important that they have to be repeated. Let’s take heed for the sake of our spiritual welfare and eternal security.

Christ categorically stated that heaven and earth will pass away but His words will not pass away. If we ignore Christ’s repetitive end time warnings, we do so at our own peril.

A DIFFERENT JESUS, A DIFFERENT SPIRIT, A DIFFERENT GOSPEL
These three areas of deception are just as alive today as they were in the Corinthian church long ago.
http://bit.ly/2fi4wKt

EFFORTLESS ENTITLEMENT
Just believe and every spiritual blessing is yours. Be happy because you have already bought an instant ticket to heaven. Repentance is merely a change of way of thinking. No need to emphasise obedience as it will nullify God’s grace. Don’t worry about working out your faith, self-denial, endurance or overcoming because nothing you do or fail to do will cause you to lose favour in God’s sight. After all, future sins are automatically forgiven. And once you are saved, it means you are always secure. You merely need to rest on the imputed righteousness of Christ; God will always see you as pure.
http://bit.ly/1ibPiTU

WATCHFUL AND READY
An end time reflection on being prepared for Christ’s return
What will earth be like when Christ returns? Why did Jesus mention Noah and Lot when referring to the end times? Notice that not many were saved in the days of Noah and Lot. Only eight persons got saved in Noah’s ark and only three escaped the destruction of Sodom. The majority perished because they lived as if God did not exist or willfully lived in sin.
http://bit.ly/2cMEKhr

COMPLACENCY VS WATCHFULNESS
Knowing God’s ability to keep us safe for eternity is not enough.
We need to emphasise personal responsibility as well.
http://bit.ly/273Ru5t