How would you respond when someone says he has been miraculously healed? Do miracles still exist today?

If I may venture an opinion—if God is the same yesterday, today and tomorrow, and the Holy Spirit lives within believers—how could miracles ever cease today? The assertion that miracles, signs and wonders have completely ceased is erroneous. It is like trying to put God in a box. It is akin to the clay telling the Potter what He ought to do.

Thus, miracles are still happening today because spirit-filled believers allow the living God to work through them.

However, the signs and wonders we see today cannot match that of the early church in its scale, quality and impact. In the fledgling first century church, miracles were not only instrumental in its phenomenal growth but accounted for its resilience amid severe persecution.

For example, in the book of Acts, people were raised from dead and healing by means was possible through the shadow or handkerchief of the apostle. How often do such miracles occur today? Though the same God is at work throughout the ages, the dispensation differs for each era.

As we consider the subject of miracles, we must not forget that false signs and wonders are going to be a prominent feature in these end times that we are now living in. This is consistent  with Jesus’ end time warning: “For false messiahs and false prophets will rise up and perform great signs and wonders so as to deceive, if possible, even God’s chosen ones” (Matthew 24:24). 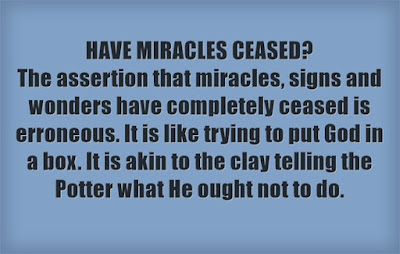 When the apostle Peter healed the crippled man at the temple gate, did he preplan the act? (Acts 3:1-10). Did he tell the crowds to come and observe him as he healed that man? Were there marketing teams to publicise the event? Did he become rich and famous out of his special anointing? Were there lights, camera, special music and ambience to “prime” people to receive healing?

Even so, when genuine servants of God perform signs and wonders today, they usually do not hog the limelight. Their motives are pure; they do not use their gifting or anointing to pursue money, fame and power.

In contrast, false miracle workers often perform their “miraculous acts” in a “controlled environment” filled with many seekers and spectators. People are naturally drawn to the miraculous, thinking that anything supernatural must be from God. So the former exploit people’s needs (eg. sicknesses) and fascination with the miraculous, using them as springboards to fame and fortune. After all, it takes two hands to clap.

Of unscrupulous miracle workers, Jesus has this to say:
While some believers think miracles have completely ceased, others earnestly pursue signs and wonders. Both viewpoints, which are on opposite poles of the ‘signs and wonders’ debate, are false. One is too conservative. The other, obsessed with and captivated by miracles, seems to be a move of the Holy Spirit but is not. The truth is to be found in the middle of the spectrum. 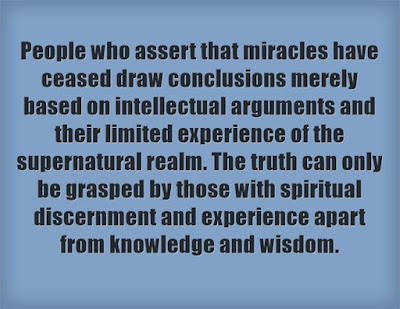 People who assert that miracles have ceased draw conclusions merely based on intellectual arguments and their limited experience of the supernatural realm. The truth can only be grasped by those with spiritual discernment and experience apart from knowledge and wisdom. Who do you think has better understanding—the former or later?

While we should keep an open mind with regards to miracles, we must not be mesmerised by awe-inspiring signs and wonders. A person who is miraculously healed of an incurable disease will, one day, still have to die. What constitutes the greatest “miracle”? It is the new birth—when people are translated from the dominion of darkness into the kingdom of light (John 3: 5-8, 1 Peter 2:9). All men are sinners by birth. But, by faith in the sacrificial death of Christ at the cross, they become children of God.

THERE CAN BE MIRACLES WHEN WE BELIEVE
A lady lawyer’s amazing recovery from coma shows us that there is hope amid the worst of circumstances. Once again, it underscores the power of faith and intercession. God can do far more than what we might ask or think.
http://bit.ly/1TajC1k

DOES GOD HEAL ALWAYS?
Doctors treat but God heals. As a Christian for forty years and a practising doctor for thirty years, I have seen people being healed in so many different ways—through supernatural means and medicine/surgery. Yet, I have also seen many who have not been healed, irrespective of their denomination or the strength of their faith.
http://bit.ly/1Mmwxp6