Will there come a time when many believers lose faith in God?

Many will lose faith in God during these perilous and tumultuous end times. Is this is a fact or a figment of someone’s imagination? Let’s explore the biblical basis for the great falling away.

Some will give up on their faith because of intense persecution while others will become victims of deception. Furthermore, the prevailing climate of lawlessness and wickedness makes it difficult—even for fervent believers—to stand firm in their faith (Matthew 24: 9-13).

“Then you will be arrested, persecuted, and killed. You will be hated all over the world because you are my followers. And many will turn away from me and betray and hate each other. And many false prophets will appear and will deceive many people. Sin will be rampant everywhere, and the love of many will grow cold. But the one who endures to the end will be saved” (Matthew 24: 9-13).

It is predicted that before Jesus comes again, two important events must take place. First, many will give up on their faith (apostasy). Second, the man of lawlessness (antichrist) will be revealed (2 Thessalonians 2:3).

“Let no one deceive you by any means; for that Day will not come unless the falling away comes first, and the man of sin is revealed, the son of perdition” (2 Thessalonians 2:3). 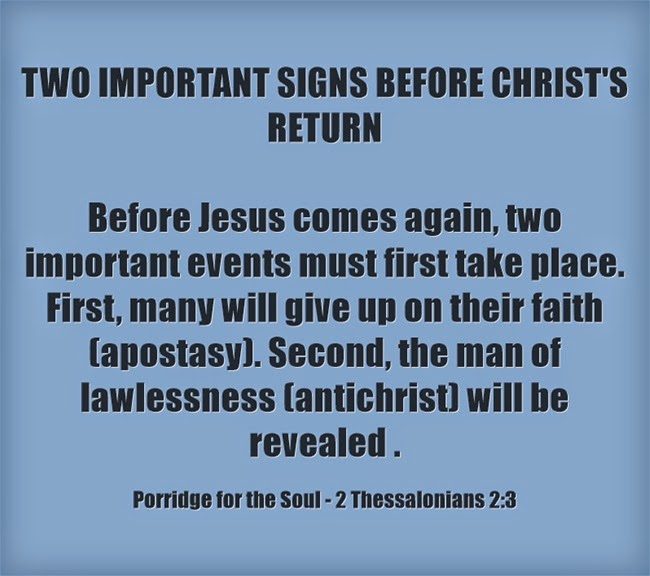 Now why does this verse (2 Thessalonians 2:3) mention these two events (in red) side by side? It is no coincidence, I believe. For the answer, we will have to turn to Revelation.

The antichrist will unleash his wrath on believers in the Great Tribulation. Many will have to choose between their allegiance to God or their survival. Why? Because no one can buy or sell unless they receive the antichrist’s ordained mark of the beast, a sign which when received would mean everlasting damnation for believers. Pushed to the brink for the sake of self-preservation, many believers will give up on God and allow the mark of the beast on themselves—never mind the eternal consequences (Revelation13:16-17, Revelation 14: 9-10).

Now we can see why, when the antichrist appears, the faith of believers’ will be put to a degree of testing that's unprecedented. Many Christians whose life is akin to a walk in the park will then have to contend with a marathon. Those who complain when the weather turns slightly hot find themselves thrown into the furnace of testing.

If they choose God and refuse the mark, they might die of starvation or get killed by the antichrist. Conversely, if they choose survival by taking the mark, it will lead them down the path of everlasting damnation. But many whose faith is not strong enough will choose the latter. They would rather give up on God. That’s why there will be such a great falling away from the faith.

From a human point of view, God may seem sadistic to allow the antichrist to persecute believers—just as He allowed satan to afflict Job or Paul. But it is His will to put us through fiery ordeals to test whether our faith is genuine (1 Peter 1:6-7).

“So be truly glad. There is wonderful joy ahead, even though you must endure many trials for a little while. These trials will show that your faith is genuine. It is being tested as fire tests and purifies gold—though your faith is far more precious than mere gold. So when your faith remains strong through many trials, it will bring you much praise and glory and honor on the day when Jesus Christ is revealed to the whole world” (1 Peter 1:6-7).

What other references allude to the fact that there will be a great falling away?


When the crunch comes, what we believe will be put to the test. It is your choice as a believer to come to your own conclusion.

Never mind what the “feel good” teachers tell you about Once Saved, Always Saved (OSAS). Or what the pre-tribulation rapture adherents say, “Believers won’t have to go through the Great Tribulation.”

As for me, I have come to the conclusion that OSAS is a lie. We need to persevere till the end to be saved.

And it is going to be a post-tribulation pre-wrath rapture, meaning that believers will have to brace themselves for the Great Tribulation. Unfortunately (or fortunately depending on how you see it), I am going against the grain of popular teaching.
http://goo.gl/vqm3Gi

In conclusion, many believers will fall away during these end times because of various factors: persecution, deception, lawlessness, sin, complacency and lack of preparation. http://goo.gl/VfeRxa

And that brings us to the million dollar question: How are we going to prepare ourselves so that we remain strong in the faith and not give up when the going gets tough? And, believe me, it is going to get really tough.

On a more optimistic note, however, here are two posts to help us discover: