FAITH ALONE: WILL IT WORK?

Can faith be seen in isolation from works in the life of a believer?

“We just need to have faith in His grace and mercy.” Perhaps we are so used to hearing preachers say, “It’s all by God’s grace,” that we come to believe that faith alone is all that is necessary in the Christian life.

To have faith in God’s grace is definitely true. But the story does not end there. If it ends there, it would be tantamount to believing in a half-truth.
Though Abraham is justified by faith, we need to remember that his faith was completed or perfected by works when he obeyed God by sacrificing his son, Isaac (James 2: 14-26).

Does James contradict Paul? No.

Paul himself spells out—both in Ephesians 2:10 and Titus 3:8—the necessity of good works as evidence of a saving faith.

What can be clearer than Paul’s injunction in Acts 26:20: “First to those in Damascus, then to those in Jerusalem and in all Judea, and then to the Gentiles, I preached that they should repent and turn to God and demonstrate their repentance by their deeds.”

If we think that the tenets of our faith only require mental assent from us, then we have been seriously mistaken. “Prove by the way you live that you have repented of your sins and turned to God” (Matthew 3:8).

Salvation is at once the easiest and most difficult thing.

It is easy because we attain it through faith, not by our good works. However, it is also the most difficult—because the state of being saved carries with it serious implications for the believer. 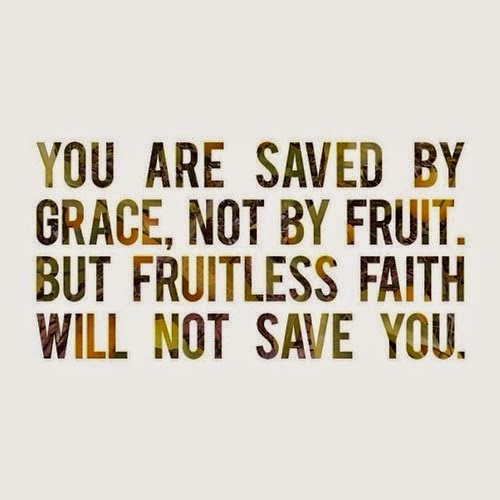 The purpose of this post is to demonstrate the necessity of good works as evidence of a saving faith.

In the practical outworking of the believer’s life, faith certainly comes in a package together with works. It’s a faith-works package.

IS REPENTANCE MERELY CHANGING ONE’S MIND?
Some say that believers only need to change their mind (ie. correct their past erroneous thinking) when they repent. Is this true?
http://bit.ly/15qK4KI

A WALK IN THE PARK?
Some compare the Christian life to a walk in the park. They say everything is by faith. You just have to believe in what Jesus has done for you at the cross. Anything more than that smacks of self-effort, pride and legalism.
http://bit.ly/1i4ec6W

For by grace you have been saved through faith. And this is not your own doing; it is the gift of God, not a result of works, so that no one may boast.
(Ephesians 2:8-9).

For we are his workmanship, created in Christ Jesus for good works, which God prepared beforehand, that we should walk in them.
(Ephesians 2:10)

He saved us, not because of works done by us in righteousness, but according to his own mercy, by the washing of regeneration and renewal of the Holy Spirit.
(Titus 3:5)

The saying is trustworthy, and I want you to insist on these things, so that those who have believed in God may be careful to devote themselves to good works. These things are excellent and profitable for people.
(Titus 3:8)

Faith without works is dead

What good is it, my brothers, if someone says he has faith but does not have works? Can that faith save him? If a brother or sister is poorly clothed and lacking in daily food, and one of you says to them, “Go in peace, be warmed and filled,” without giving them the things needed for the body, what good is that? So also faith by itself, if it does not have works, is dead.
But someone will say, “You have faith and I have works.” Show me your faith apart from your works, and I will show you my faith by my works. You believe that God is one; you do well. Even the demons believe—and shudder! Do you want to be shown, you foolish person, that faith apart from works is useless? Was not Abraham our father justified by works when he offered up his son Isaac on the altar? You see that faith was active along with his works, and faith was completed by his works; and the Scripture was fulfilled that says, “Abraham believed God, and it was counted to him as righteousness”—and he was called a friend of God. You see that a person is justified by works and not by faith alone. And in the same way was not also Rahab the prostitute justified by works when she received the messengers and sent them out by another way? For as the body apart from the spirit is dead, so also faith apart from works is dead.
(James 2:14-26).
Posted by P A Lim at 22:08