How to develop discernment and escape the clutches of destructive heresies

Christians have been warned that heresies (false teachings) will be increasingly prevalent during these end times.

The apostles Paul, Peter and John, the main protagonists in the New Testament, warn believers of the danger posed by destructive heresies. *

The eternal security of believers may be compromised if they are seduced and deluded by enticing words of man’s wisdom that twist or misrepresent the major truths of the Bible. 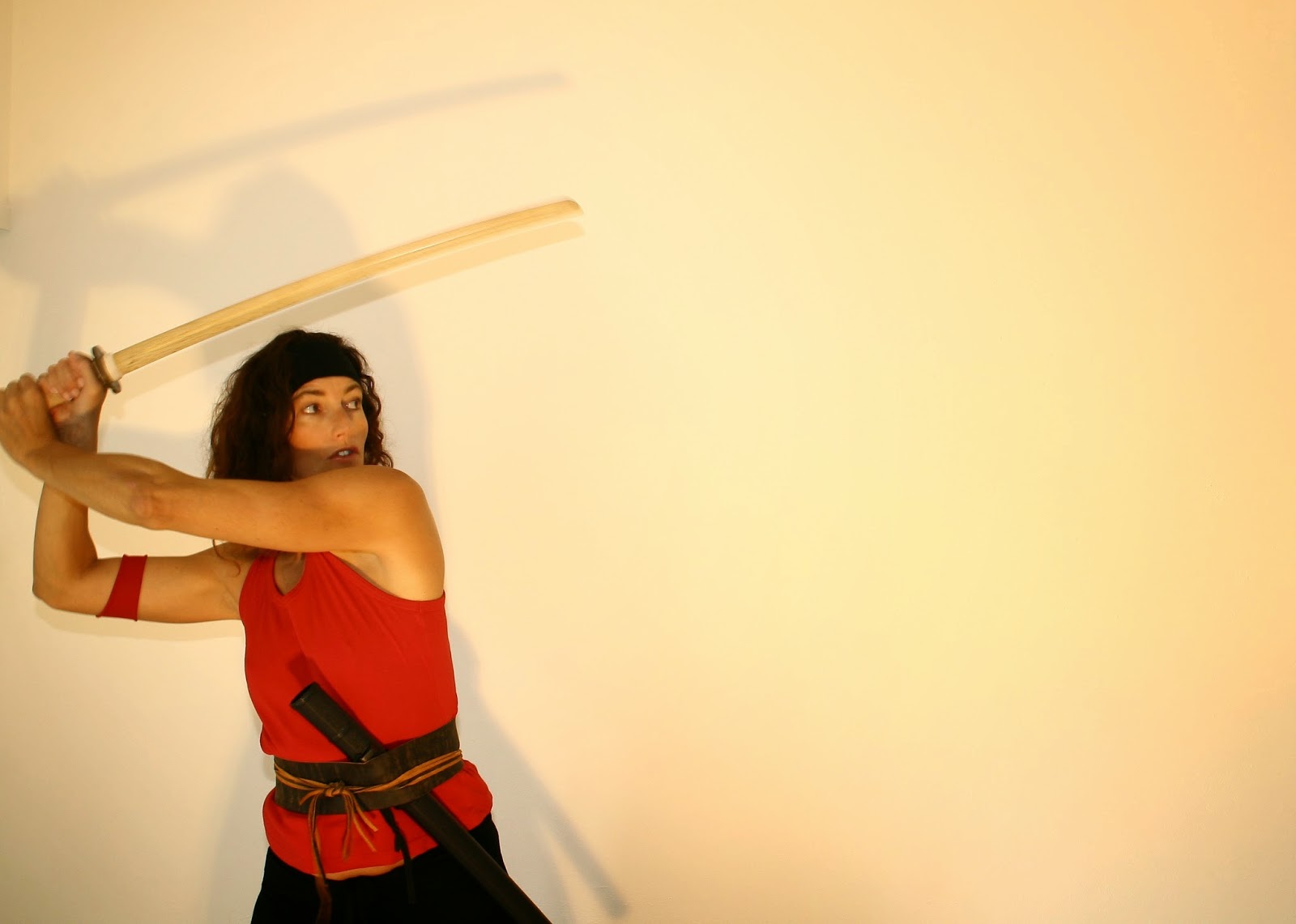 How then can we fight false teaching?

1. Be diligent in studying the Bible.
“For Ezra had set his heart to study the Law of the Lord, and to do it and to teach his statutes and rules in Israel” (Ezra 7:10).

“Be diligent to present yourself approved to God as a workman who does not need to be ashamed, accurately handling the word of truth” (2 Timothy 2:15).

2. Study not just selected passages but the whole Word. Arrive at a conclusion based on all the major scriptural references alluding to the topic in question. http://bit.ly/1bus4hn

The apostle Paul declares: “For I have not shunned to declare to you the whole counsel of God” (Acts 20:27).

Why do we need to test any teaching against the whole Bible? Because when we apply the whole counsel of God on false doctrine, the latter collapses like a house of cards. 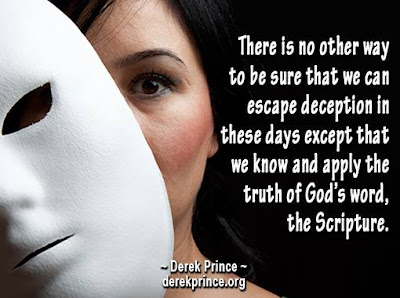 3. Acknowledge the Holy Spirit’s help in illumining the Word for us. Pray for discernment.

If it is easy to spot out a heresy, then it is no longer a deception. It will then be clearly seen for what it is—as tar fallen on snow—that it is false. That is why we need to know the Word well and have discernment.

“When the Spirit of truth comes, he will guide you into all the truth, for he will not speak on his own authority, but whatever he hears he will speak, and he will declare to you the things that are to come” (John 16:13).

“Now we have received not the spirit of the world, but the Spirit who is from God, that we might understand the things freely given us by God” (1 Corinthians 2: 12).

“The spiritual person judges all things, but is himself to be judged by no one. For who has understood the mind of the Lord so as to instruct him? But we have the mind of Christ” (1 Corinthians 2:15-16).

“I write these things to you about those who are trying to deceive you. But the anointing that you received from him abides in you, and you have no need that anyone should teach you. But as his anointing teaches you about everything, and is true, and is no lie—just as it has taught you, abide in him” (1 John 2: 26-27).

Do not unquestioningly accept the words of a leader just because he/she seems confident, authoritative and has many followers. A God-fearing leader should not feel threatened by dissenting views—even by those who come under his/her teaching. 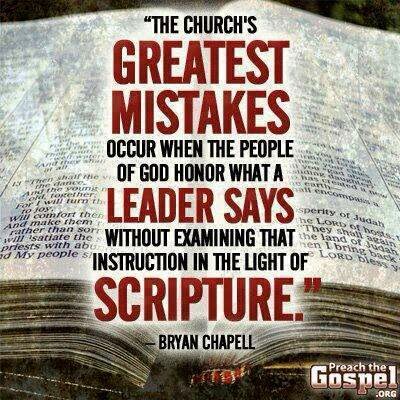 “And the people of Berea were more open-minded than those in Thessalonica, and they listened eagerly to Paul’s message. They searched the Scriptures day after day to see if Paul and Silas were teaching the truth” (Acts 17:11).

5. Consider various aspects of an issue, including the views of those who disagree with us.

“The first to speak in court sounds right—until the cross-examination begins” (Proverbs 18:17).

7. Does it reflect a well-balanced view of God—that He is holy and just, apart from being full of love, grace and mercy? http://bit.ly/1dHOXOX

“Righteousness and justice are the foundation of your throne; steadfast love and faithfulness go before you” (Psalm 89:14).

8. Does it exalt or deny Christ? 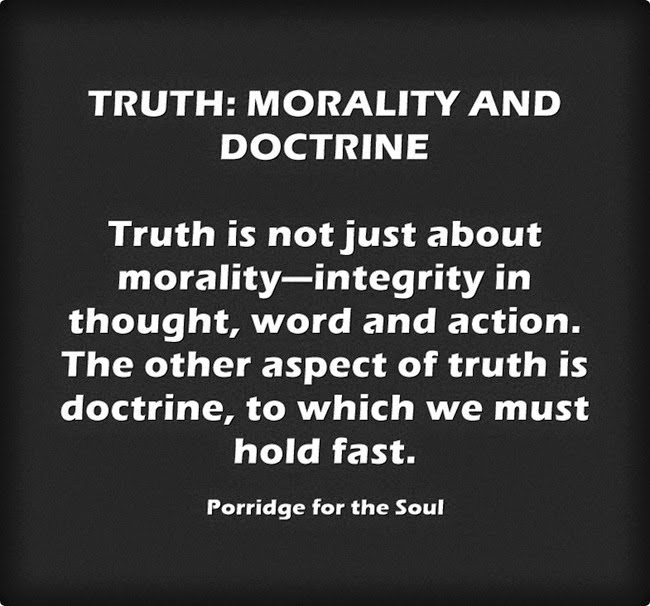 Paul during the last days of his life charged young Timothy to preach sound doctrine:

I charge you in the presence of God and of Christ Jesus, who is to judge the living and the dead, and by his appearing and his kingdom: preach the word; be ready in season and out of season; reprove, rebuke, and exhort, with complete patience and teaching. For the time is coming when people will not endure sound teaching, but having itching ears they will accumulate for themselves teachers to suit their own passions, and will turn away from listening to the truth and wander off into myths.
(2 Timothy 4:1-4).

But false prophets also arose among the people, just as there will be false teachers among you, who will secretly bring in destructive heresies, even denying the Master who bought them, bringing upon themselves swift destruction. And many will follow their sensuality, and because of them the way of truth will be blasphemed.
(2 Peter 2:1-2).

Beloved, do not believe every spirit, but test the spirits to see whether they are from God, for many false prophets have gone out into the world.
(1 John 4:1).

“So guard yourselves and God’s people. Feed and shepherd God’s flock—his church, purchased with his own blood—over which the Holy Spirit has appointed you as elders.  I know that false teachers, like vicious wolves, will come in among you after I leave, not sparing the flock. Even some men from your own group will rise up and distort the truth in order to draw a following.”
“And now I entrust you to God and the message of his grace that is able to build you up and give you an inheritance with all those he has set apart for himself.”
(Acts 20: 28-30, 32).

OVERCOMING DECEPTION
Understanding the wiles of satan is the first step towards winning the battle against deception.
http://bit.ly/1eEMLwM

WILL TRUE GRACE PLEASE STAND UP?
False grace was exposed in a video in which Dr Michael Brown was being interviewed by Sid Roth. A compelling, well-balanced, Word-based presentation.
http://bit.ly/1fV1mD1

THE DIVINE MAKEOVER
We all love a God whose image fits our expectation of a benevolent being. We prefer preachers who portray God as loving and forgiving, patient with our sins and deficiencies – rather than those who dwell on judgment.
http://bit.ly/1bJcfJo