HANG IN THERE, DON'T GIVE UP 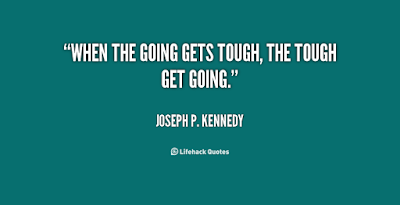 Sometimes, we don’t like to admit that testings are an integral part of the Christian experience as much as blessings and victories.
However, the process of growing into maturity involves learning to persevere through our trials and arriving at a place of unshakeable faith. 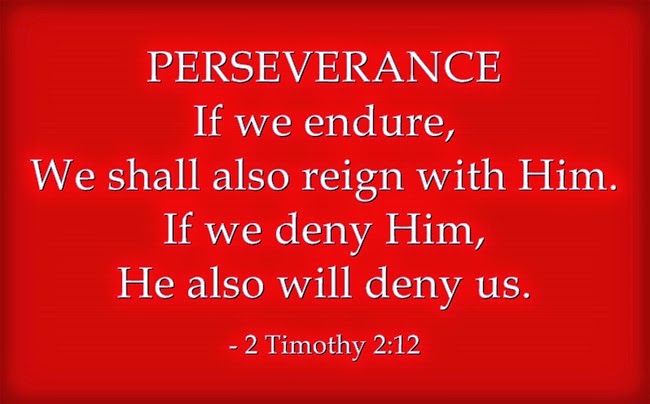 What are some of the important signs of the end times Jesus spoke about at the Mount of Olives?

Persecution, deception and falling away from the faith (apostasy).

“Then you will be handed over to be persecuted and put to death, and you will be hated by all nations because of me. At that time many will turn away from the faith and will betray and hate each other, and many false prophets will appear and deceive many people. Because of the increase of wickedness, the love of most will grow cold, but the one who stands firm to the end will be saved” (Matthew 24: 9-13).

It is implied by Jesus that if we fail to persevere, if we fall away because of persecution or become victims of deception, we will NOT be saved (Matthew 24:13). A most serious warning indeed. 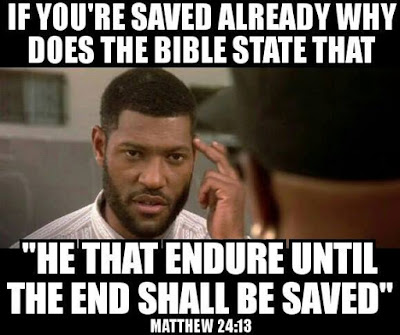 Thus it is so important to be strong and well-rooted in Christ as the turbulence of the end times will only get worse.

“So then, just as you received Christ Jesus as Lord, continue to live in him, rooted and built up in him, strengthened in the faith as you were taught, and overflowing with thankfulness” (Colossians 2:6–7).

It is equally important that we do not allow the cares, worries, riches and pleasures of the world to distract us and lure us away from the faith, like the seed which fell among thorns in The Parable of the Sower:

“The seed that fell among thorns stands for those who hear, but as they go on their way they are choked by life’s worries, riches and pleasures, and they do not mature” (Luke 8:14).

Indeed we should be like the seed which fell on good soil: “But the seed on good soil stands for those with a noble and good heart, who hear the word, retain it, and by persevering produce a crop” (Luke 8:15).

The process of growing into maturity involves learning to persevere through our trials and doubts, and arriving at a place of unshakeable faith (James 1:2-4, Hebrews12:11 and 2 Corinthians 4:16-17). 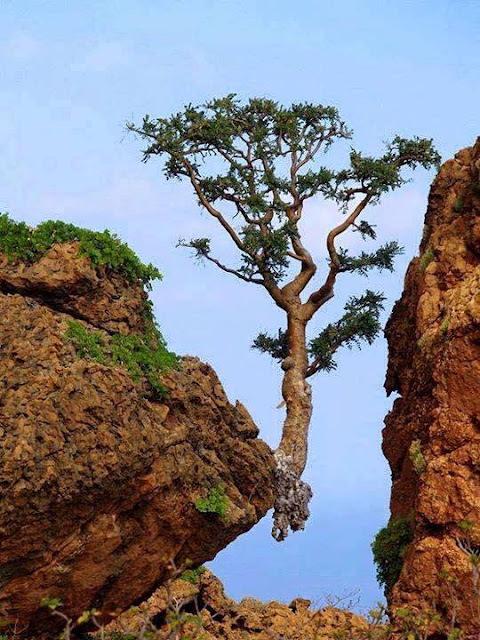 Sometimes, we don’t like to admit that trials are an integral part of the Christian experience as much as blessings and victories. Indeed, there will be times when even fervent believers begin to doubt. They feel as if God has forsaken them (Psalm 77: 8-9).

“Consider it pure joy, my brothers and sisters, whenever you face trials of many kinds, because you know that the testing of your faith produces perseverance. Let perseverance finish its work so that you may be mature and complete, not lacking anything” (James1:2-4).

Hebrews chapter 10 highlights the fact that persevering faith is needed to remain saved:
But my righteous one will live by faith.
And I take no pleasure
in the one who shrinks back.”
But we do not belong to those who shrink back and are destroyed, but to those who have faith and are saved.
(Hebrews 10:38-39).

Jude reinforces the truth that persevering faith is needed:
“I wish to remind you, as you all know, that God, when once he had brought the people out from Egypt, afterward destroyed those who did not believe” (Jude 1:5). Instead of taking possession of the Promised Land after leaving Egypt and crossing the Red Sea, God’s chosen people fell.

Paul outlines, in greater detail, the events leading to their fall from God’s favour:
“For I do not want you to be ignorant of the fact, brothers and sisters, that our ancestors were all under the cloud and that they all passed through the sea. They were all baptized into Moses in the cloud and in the sea. They all ate the same spiritual food and drank the same spiritual drink; for they drank from the spiritual rock that accompanied them, and that rock was Christ. Nevertheless, God was not pleased with most of them; their bodies were scattered in the wilderness.

“These things happened to them as examples and were written down as warnings for us, on whom the culmination of the ages has come” (1 Corinthians 10:1-11).

Peter exhorts believers to be all the more diligent to confirm our calling and election for if we practice ‘these qualities’ we will never fall (2 Peter 1:10).

And what are ‘these qualities’? They are spelled out in the preceding verses: “For this very reason, make every effort to supplement your faith with virtue, and virtue with knowledge, and knowledge with self-control, and self-control with steadfastness, and steadfastness with godliness, and godliness with brotherly affection, and brotherly affection with love” (2 Peter 1:5-7).

Peter issues a solemn warning to believers who willfully choose to live in sin:
“For if, after they have escaped the defilements of the world through the knowledge of our Lord and Savior Jesus Christ, they are again entangled in them and overcome, the last state has become worse for them than the first. For it would have been better for them never to have known the way of righteousness than after knowing it to turn back from the holy commandment delivered to them” (2 Peter 2:20-21).

But how many have the faith to persevere?  Jesus laments in Luke 18:8b: “When the Son of Man comes, will He find faith on earth?”

REPETITIVE SINNING
What fate awaits those who sin repeatedly after they have believed?
http://bit.ly/1hhs75c
Posted by P A Lim at 00:35