Now that Barack Obama is re-elected as President of the United States, he has matchless executive power. In fact, being the leader of the world’s greatest superpower, he is the world leader with the greatest power.

Uncle Ben told Spider-Man: "With great power comes great responsibility." And the masked crusader hung on to it. It was to become his mantra and motto in life.

He was careful to use the extraordinary powers he possessed to help the weak and defenseless – not to intimidate or bully others. 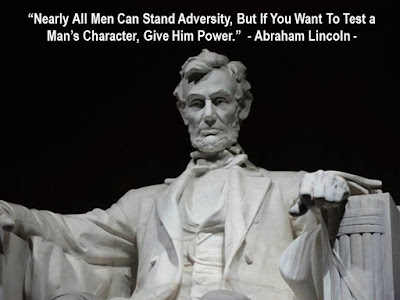 How we handle great power reflects our character. "Nearly all men can stand the test of adversity, but if you really want to test a man's character, give him power."  -- Abraham Lincoln.

Like wealth, power is the one of the ultimate tests of a person’s character. When a person gains power over others – whether it is in a society or fraternity, government or politics or even the hallowed corridors of the church – the tendency is to force others to do his bidding even when it is against their will.

Lord Acton, the British historian, was right when he said: “All power tends to corrupt; absolute power corrupts absolutely.”

Such is the behaviour of kings and dictators who force all to bow down to them, exterminate all who go against them, pick whoever they want for their sensual pleasure and trample on the rights of the weak and poor.

Believers too have been endowed with great power. It’s the power to change lives for the better.

And we need to handle well the power entrusted to us – with maturity and a sense of responsibility.

Some are given special anointing to do miraculous works, heal and deliver others from sicknesses and bondages; others are gifted evangelists who can share the Good News to multitudes and reap a bountiful “harvest”.

While some have been given the capacity to transform lives through speech (preaching and teaching), others have been endowed with the power to change lives through the pen. The latter may not be so dramatic but, by mindset transformation, it brings about lasting change.

“My heart overflows with a good theme; I address my verses to the King; my tongue is the pen of a ready writer.” (Psalm 45:1).

So let us not underestimate the power of the pen. Under God’s anointing, it becomes a powerful instrument to change lives. It is the Holy Spirit who inspires the writer to put down his thoughts. And the reader becomes enlightened, and even gets convicted, by the same Holy Spirit. When that happens, great power is being unleashed as is evident from the following verse:

“We pull down every proud obstacle that is raised against the knowledge of God; we take every thought captive and make it obey Christ” (2 Corinthians 10:5). Good News Translation.

Come to think of it, from another angle, the statement "With great power comes great responsibility" has other ramifications: When we substitute the word ‘power’ with one or more of the following words – gifts, talents, wealth, resources.

Sometimes we wish for more power, gifts, talents and resources.

But we might probably change our minds when we realise it’s an option that’s not so rosy after all.

It would mean we need greater and greater responsibility on our part as we handle the “power” and utilise the gifts, talents and resources entrusted to us.