The Creator of the universe is almighty. Yet, He is also a personal God who cares for man. 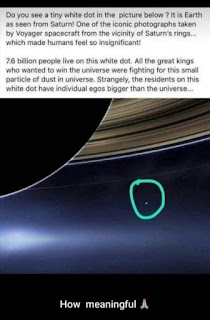 The circled, tiny white dot in the picture above is earth—taken by the Voyager spacecraft in the vicinity of the distant planet, Saturn.

When I consider the heavens, the work of Thy hands, what is man that you are mindful of him and care for him (Psalm 8:3-4)? 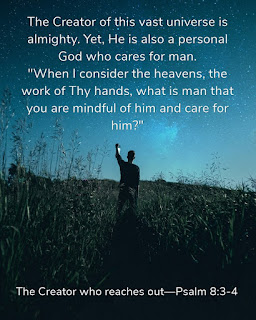 The almighty God created the vast universe with all the mind-blowing collection of planets, stars, galaxies and constellations. Yet He has an interest in the affairs of man.

Two thousand years ago, God sent His Son, Jesus Christ, into the world to die on the cross for the sins of man. Christ took the punishment in man’s place when He died on the cross. He became the scapegoat for man, bearing the punishment for sins which man rightly deserves.

Why did God do this? The purpose is to reconcile sinful man to Him.

Those who believe in Christ will have their sins forgiven, will be able to connect with God and be assured of a place in heaven in future—provided they remain faithful.  https://bit.ly/3hdS3pZ

Such an amazing God—so mighty that He created the universe—yet so personal in His love and care for man ... that He longs to relate to man.

Though Christ had no sin, our sins were attributed to Him when we believed in Him. Our sins were imputed to Christ—He took the penalty that our sins deserved.

“For our sake God made Christ to be sin who knew no sin, so that in Christ we might become the righteousness of God”  (2 Corinthians 5:21).

This is called imputed righteousness—ie. we take on Christ’s righteousness when we believe that He died for our sins at the cross.

The invitation is open. Anyone who believes in Christ will be saved from future judgment because Christ has paid the price, bearing the punishment for sins which man rightly deserves.

Would you accept God's offer of reconciliation?

“For God loved the world so much that He gave his only Son, so that everyone who believes in Him may not die but have eternal life” (John 3:16).

“To all who did receive him, who believed in his name, He gave the right to become children of God” (John 1:12).

Isn’t it mind-boggling that the Creator of the universe can be our friend?

“No longer do I call you servants, for the servant does not know what his master is doing; but I have called you friends” (John 15:15a).

WHY SALVATION IS CONDITIONAL 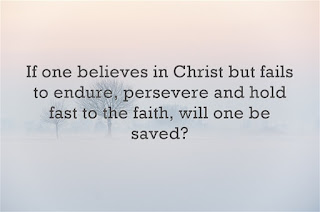 Even a two-year-old child can be taught the meaning of the word ‘reconciliation’. It happens when two parties who were once enemies with one other agree to become good friends.