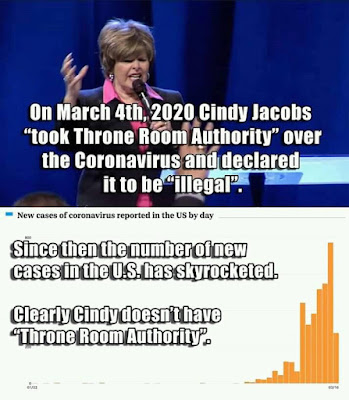 In early March 2020, self-styled “prophet” Cindy Jacobs took authority over the coronavirus, declared it “illegal” and decreed for it to stop.

This is the video link: https://www.youtube.com/watch?v=djwg68rHB_U&t=165s
To hear her, please fast forward to 52.30 and watch till the end.

The context of the video is a national day of prayer where CJ and other leaders joined together to pray against the viral epidemic and also pray for healing for those affected … a commendable act indeed.

On 9th March 2020, in response to the above video, I shared this in social media and posed several questions:
EARTH-SHATTERING DECLARATION BY "PROPHET" CINDY JACOBS

Do you believe in the authority of this self-proclaimed prophet?

Can modern-day prophets command drought and rain like Elijah?

Didn't Jesus warn us that the end times will be marked by pestilences as part of the "birth pangs"?

Didn't Hebrews 12:26 tell us that there will be great shaking of the earth and heavens?

Furthermore, is the viral epidemic an issue of legality (since she used legal terms like illegal and decree)?

A few days later, true to my expectation, on 12th March 2020, the head of the World Health Organization (WHO) declared that the outbreak had worsened to become a pandemic.

Even before the announcement by WHO, I had already sensed that all was not right with her “authoritative” declaration against the virus; I was proven right a few days later by WHO.

Let us deal with the above questions,one by one.

Do you believe in the authority of this self-proclaimed prophet?
Most modern-day “prophets” are long on showmanship but short on truth … long on style but short on content. They appear impressive on stage, making empty declarations of power and authority … and the naïve and gullible are fooled.

The fact she rebuked the virus in early March but the outbreak worsened a few days later (became a pandemic) shows us that she is a false prophet.

Can modern-day prophets command drought and rain like Elijah?
Again, the answer is No. These so-called prophets can lay claim to signs like gold dust and angel feathers but it is clear they have no authority over viruses or the weather. Those who claim they have the same degree of anointing as Elijah are deluded. Some say believers should speak to the mountain (an insurmountable situation) as a demonstration of great faith but the question is whether it is God's will to take authority over and put a stop to the spread of the virus. “Truly, I say to you, whoever says to this mountain, ‘Be taken up and thrown into the sea,’ and does not doubt in his heart, but believes that what he says will come to pass, it will be done for him” (Mark 11:23).

Didn't Jesus warn us that the end times will be marked by pestilences as part of the "birth pangs"?
Yes, Jesus warns us that there will be earth-shaking events including wars, famines and pestilences (Luke 21:11). Isn’t Cindy Jacobs aware that she is praying against what is expressly mentioned in scriptures? She may sound authoritative as a "prophet" against the stirring background music but those words neither originate from the Holy Spirit (or else it will be fulfilled) nor are aligned with scriptures (Luke 21:11). And the Spirit never contradicts the Word.

Finally, is the viral epidemic an issue of legality (since she used legal terms like illegal and decree)?
No, it is not an issue of legality but a massive health, social and economic problem that requires the cooperation of the medical community, people and government. Doctors need to come up with measures to detect cases, isolate and treat patients; people must be responsible and take measures like wearing masks, social distancing, self-quarantine and frequent hand washing; government must have the political will to shut their borders or impose shutdown in affected areas or a whole city/region (as in the case of Wuhan/Hubei, China).

Once again, we have to be reminded not to judge prophets by their hype, popularity, charisma or fame but by the validity of their declaration. Has it been fulfilled? Is it scriptural? Jesus warns us there will be many end-time false prophets. The ultimate test of a prophet is whether what they proclaim is true or false and whether it aligns with scriptures or not. On both counts, CJ has failed.

Let us now look at the track record of Cindy Jacobs:

Past failed prophecy by Cindy Jacobs: "Brother Eddie, God showed me that you will be the President of the Philippines." (Watch video from 6.12).   https://www.youtube.com/watch?v=IAW_sl0MRDc

By the way, have you heard of such a guy who became the President of the Philippines? CJ said that God showed her that Eddie would be a great public figure. Isn’t that taking God’s name in vain? "Eddie Villanueva ran for the 2010 presidential election where he lost for the second time; he finished fifth out of nine presidential candidates with 1,125,878 votes or 3.12% of the total votes."  https://en.wikipedia.org/wiki/Eddie_Villanueva

In investment (unit trust), past performance is not an indication of future results. But when we judge the validity of prophecy, the opposite is true ie. past is a good indication of the present and future. False prophecy made by a "prophet" in the past should make us extremely vigilant and cautious now about his or her ministry.

When prophecies are vague, depict a wide A to Z scenario, we know that this is one of the characteristics of a false prophet:

“I want you to pray. The next two years, the Lord is showing me, are going to be extremely significant for the Philippines. Either you’re going to go into greatness, it’s going to be that transformed nation, or, I see that there’s going to be some troubled times.” – Cindy Jacobs

This type of “prophecy”, if you can deem it so, attempts to cover all the likely scenarios in future so that no one can accuse the prophet if the event does not come to pass.

It is not difficult to spot out false prophets. We need discernment of the Holy Spirit and a mind renewed by scriptures.

The natural person does not accept the things of the Spirit of God, for they are folly to him, and he is not able to understand them because they are spiritually discerned. The spiritual person judges all things, but is himself to be judged by no one. “For who has understood the mind of the Lord so as to instruct him?” But we have the mind of Christ.
(1 Corinthians 2:14-16)

I am hesitant to say this but it has to be done: Churches in Malaysia and our southern neighbour are so awed and mesmerised by "apostles" and "prophets" (such as Bill Johnson, Cindy Jacobs) from the West that they willingly give them free access to their pulpits. Why? Often because we think what comes from the West must be good. By failing to judge correctly, many believers have been and will be led astray.

How many times did Jesus warn about end-time deception in Matthew chapter 24? Answer: four times. https://bit.ly/39XClcs

Unfortunately, not many believers take the Lord’s warning to heart. Many lack discernment and a good understanding of scriptures which enable them to avoid being deceived.

Even as I write this blog post, my country is coming under an order by the government to restrict non-essential movement and travel from 18th to 31st March 2020. Though it is not a total lockdown, it shows that the Malaysian government is serious in tackling the coronavirus issue. Empty words spoken on stage (like declaring a virus illegal) are futile. Only the concerted effort by the medical community, people and government will be able to contain and mitigate this pandemic with its far-reaching impact on the economy and the way we live, work and play. Prophets like Cindy Jacobs need to be reminded of this quote:

TRUE VS FALSE PROPHETS
“Do not believe every spirit, but TEST the spirits to see whether they are from God, for MANY false prophets have gone out into the world” (1 John 4:1).
https://bit.ly/2W1b5p8

RUNNING AFTER PROPHECY
C'mon, this anointed prophet is in town. You needn't be confused anymore when you come to life’s crossroads. Don’t miss the opportunity. Get a personal prophetic word direct from heaven’s throne.
http://bit.ly/1jkvv4c

Understanding the wiles of satan is the first step towards winning the battle against deception. For we must not be ignorant of satan’s devices.
https://bit.ly/39XClcs