A brother cautioned me that we should back off from making a tough stand when faced with false teachers. After all, he says, Galatians 6:1 exhorts us to gently restore a believer who has been overtaken by sin lest we ourselves be tempted.

Firstly, let us focus on the approach taken by the apostles towards false teachers.
Tolerance is often regarded as a positive trait. Sometimes we think that maturity means we must always be tolerant—even to the extent of condoning false teaching.

But that is not the stance adopted by apostles Paul, Peter and John. They made sure they took a strong stand against destructive heresies (2 Timothy 4:1-4; 2 Peter 2:1; 1 John 4:1). For full text of these verses, please see appendix below.

"I do not believe in the weak tolerance that we hear preached so often now, the idea that Jesus must tolerate everyone and that the Christian must tolerate every kind of doctrine. When we become so tolerant that we lead people into mental fog and spiritual darkness we are not acting like Christians, we are acting like cowards!" -- A. W. Tozer : Faith Beyond Reason

Contending against false doctrine (heresies) will stop believers from slipping down the path of deception and eternal damnation.

Fighting the good fight of faith is not just about keeping our personal faith and finishing the race. It is also about contending for the faith (Jude 3), preventing believers from being deceived by enticing words of man’s wisdom that delude many and send them to destruction. “Do not treat prophecies with contempt but test them all; hold on to what is good, reject every kind of evil” (1 Thessalonians 5:20-22). 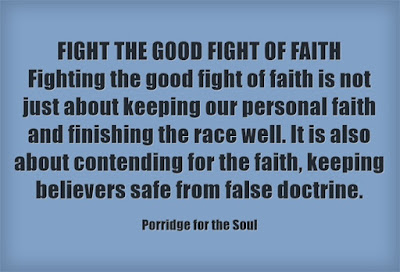 Preaching the truth, the Word of God, irrespective of the season, is of paramount importance. The flock needs to be fed the solid Word, especially when there is false teaching (heresy) that is so enticing; it tickles and soothes “itching ears”. People are naturally drawn away from truth to distorted versions of truth (lies) because the latter give them the “feel good” feeling.  There is a great need not only to teach and encourage (positive) but also to correct and rebuke (negative).

Before he left the elders of the church at Ephesus to go to Jerusalem, Paul shared with them a poignant farewell message:
“So guard yourselves and God’s people. Feed and shepherd God’s flock—his church, purchased with his own blood—over which the Holy Spirit has appointed you as elders.  I know that false teachers, like vicious wolves, will come in among you after I leave, not sparing the flock. Even some men from your own group will rise up and distort the truth in order to draw a following.”
“And now I entrust you to God and the message of his grace that is able to build you up and give you an inheritance with all those he has set apart for himself.”
(Acts 20: 28-30, 32).

We need to ask ourselves, “Why did Paul call these false teachers vicious wolves?” And why did he caution believers that it is by preserving sound doctrine that they will receive an inheritance God has planned for them in future (Acts 20:32)? Obviously, the truth is that believers who adhere to false teaching will suffer serious eternal consequences. 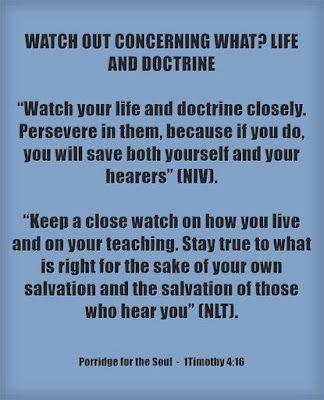 The necessity of preserving sound doctrine can also be seen in 1Timothy 4:16. What does Paul’s warning in this verse mean? If believers willfully continue living in sin, fail to hold fast to righteousness and correct doctrine, get deceived by heresy, their eternal security may be undermined. Also, members of the flock taught by false teachers may also suffer the same fate. Persevering in our life and doctrine will ensure salvation for us and our hearers.

Secondly, going back to the above warning from a brother (who says that Galatians 6:1 exhorts us to gently restore a believer who has been overtaken by sin lest we ourselves be tempted), it must be pointed out that personal sin is different from false teachings.


A little leaven leavens the whole mass of dough (Galatians 5:9). False teaching not only affects the one deceived; its “poison” spreads to affect other believers, causing them to be deceived as well.

It is very unlikely that false teachers who have a huge following and many perks that come with a big church (money, fame and power) will change their teaching. They have been deceived and have become agents of Satan for earthly gain. The only way is to call them out and to warn believers about their teachings so that the pool of deceivers and deceived becomes smaller. In effect, we will be snatching many deceived believers out from the fire (Jude 23).

We need to identify with God the way He views false teachings, which is dead serious:
“And I solemnly declare to everyone who hears the words of prophecy written in this book: If anyone adds anything to what is written here, God will add to that person the plagues described in this book. And if anyone removes any of the words from this book of prophecy, God will remove that person’s share in the tree of life and in the holy city that are described in this book” (Revelation 22:18-19).

“Let God’s curse fall on anyone, including us or even an angel from heaven, who preaches a different kind of Good News than the one we preached to you” (Galatians 1:8).

How can we adopt a weak, gentle and tolerant stance towards heresy when God hates it, the apostles hate it and the souls of many deceived believers are at stake? 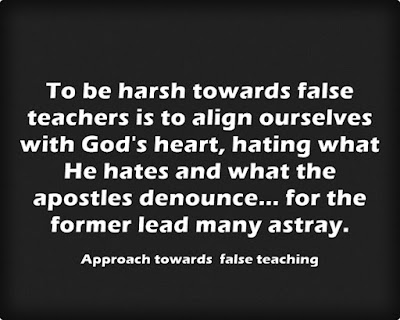 APOSTLES’ TOUGH STANCE VS FALSE TEACHINGS
“I charge you in the presence of God and of Christ Jesus, who is to judge the living and the dead, and by his appearing and his kingdom: preach the word; be ready in season and out of season; reprove, rebuke, and exhort, with complete patience and teaching. For the time is coming when people will not endure sound teaching, but having itching ears they will accumulate for themselves teachers to suit their own passions, and will turn away from listening to the truth and wander off into myths” (2 Timothy 4:1-4)

“But false prophets also arose among the people, just as there will be false teachers among you, who will secretly bring in destructive heresies, even denying the Master who bought them, bringing upon themselves swift destruction”(2 Peter 2:1).

“Beloved, do not believe every spirit, but test the spirits to see whether they are from God, for many false prophets have gone out into the world” (1 John 4:1).

(Behind false teaching there is a spirit. False teachers are agents of Satan, who knows that his ultimate destiny is inevitable (Revelation 20:10) but, before that, he wants to drag along as many believers as he can with him into eternal damnation).