Are modern-day believers obligated to follow the laws concerning religious festivals found in the Old Testament?

Some Christians are reviving the religious practices of God’s people found in the Old Testament. They emphasise observance of the various religious festivals as commanded by Moses. They say it helps them to understand their Hebrew roots better, enhances intimacy with God and elevates worship to greater heights.

These festivals were observed at the sanctuary in the wilderness and later at the temple in Jerusalem. Such occasions were marked by animal sacrifices, meat and drink offerings, confession of sins and great rejoicing.

The seven religious festivals in the Old Testament are listed in Leviticus 23: Passover, Unleavened Bread, Feast of First Fruits, Feast of Weeks, Feast of Trumpets, Day of Atonement, and Feast of Tabernacles. They were held on specific days in a year and the cycle was repeated every year.

Are these religious festivals still relevant today? Are they binding on modern-day believers?

These festivals are no longer binding on believers today since they are only a shadow of better things to come. Ever since Christ, the perfect sacrificial Lamb came to reconcile man to God through the shedding of His blood, the significance of these festivals has diminished.

Long ago, the high priest had to repeatedly offer sacrifices in order to take away man’s sins. But when Christ came, He offered for all time a single sacrifice for sins through His death on the cross. Christ’s offering of Himself is superior, perfect and once-and-for-all, unlike the priest’s offerings (Hebrews 10: 1, 11-14).

In fact, the first (repetitive offerings by the priest) had to be abolished in order to make way for the second, Christ’s offering of Himself (Hebrews 10:9).

“Christ has obtained a ministry that is as much more excellent than the old as the covenant he mediates is better, since it is enacted on better promises” (Hebrews 8:6).

If the old covenant were faultless, there would have been no occasion for a second (Hebrews 8:6-7). The old covenant—including its ceremonial laws and religious festivals—has been set aside and made obsolete with Christ’s coming (Hebrews 8:13).

These festivals are merely a shadow of things to come whereas the substance is found in Christ:

“Therefore let no one pass judgment on you in questions of food and drink, or with regard to a festival or a new moon or a Sabbath. These are a shadow of the things to come, but the substance belongs to Christ” (Colossians 2: 16-17, ESV).

“Don’t let anyone worry you by criticising what you eat or drink, or what holy days you ought to observe, or bothering you over new moons or sabbaths. All these things have at most only a symbolical value: the solid fact is Christ” (Colossians 2:16-19, J.B. Phillips).

“So don’t let anyone condemn you for what you eat or drink, or for not celebrating certain holy days or new moon ceremonies or Sabbaths. For these rules are only shadows of the reality yet to come. And Christ himself is that reality” (Colossians 2:16-17, NLT).

What other verses tell us that the feasts are no longer binding on believers today?

When Christ came, He broke down the wall of partition between Jews and Gentiles since it was the ceremonial laws (with its stringent commandments) that kept these two groups of people apart (Ephesians 2:14-15). Should we rebuild this wall again? Of course, no.

Believers should see themselves as one in Christ, neither Jew nor Greek (Galatians 3:27-28). Paul argued cogently that Gentile believers constitute the new Israel (Galatians 3, Romans 9-11). How can we remain united in Christ if we keep on insisting that believers should keep such religious festivals?

What was the decision reached by the Jerusalem council on the issue whether new Gentile believers had to keep the ceremonial laws of Moses like their Jewish counterparts? The Gentiles were told they had to “abstain from what has been sacrificed to idols, and from blood, and from what has been strangled, and from sexual immorality” and no greater burden was laid upon them apart from these requirements (Acts 15: 19-20, Acts 15: 28-29). Clearly, these were measures put in place to simplify the faith for the recent additions (Gentiles) to the fledgling church and move away from ritualistic practices. Should we then reinstate such festivals and make them normative for modern-day believers? No.

The book of Galatians is an attempt by Paul to underscore the fact that we are free in Christ, saved by grace through faith, not shackled by Jewish legalism—and that includes circumcision, observance of the ceremonial laws and religious festivals. This letter may be called the Magna Charta of Christian liberty.

Whereas man failed to fulfil the requirements of the ceremonial laws of Moses (of which the feasts were a part), Christ fulfilled all of them: "Because we broke God’s laws, we owed a debt—a debt that listed all the rules (ordinances) we failed to follow. But God forgave us of that debt. He took it away and nailed it to the cross" (Colossians 2:14). If we are now debt-free (declared righteous based on Christ's work on the cross), do we still have to observe the feasts?

What are the possible dangers of encouraging the practice of observing these religious feasts?

Firstly, there is the danger of undermining the centrality and preeminence of Christ and His work at the cross (1 Corinthians 2:2).

Secondly, it might create division within the Body of Christ. Believers who do not observe such festivals may feel that they are not up to the mark, spiritually, compared to those who do. (Actually, the former should not feel like that as Colossians 2:16 tells us that we should not let anyone judge us for not observing religious festivals; it’s a false scruple).

Thirdly, if one continually emphasises observance of such feasts, one might neglect The Gospel Commission, which is to make disciples of all the nations (Matthew 28:19-20).

Fourthly, it is fallacious to think that we are embracing a purer, better and “more authentic” brand of Christianity by merely incorporating these ancient religious festivals in our churches. If we are not Christ-centered, if we do not regularly seek God’s presence on the basis of Christ’s shed blood, if we fail to repent when we sin, then all the worship, dancing and rejoicing during these festivals are just a form.

Undoubtedly, religious festivals (like Passover) helps us better understand why shedding of blood is necessary for atonement of man’s sins, and appreciate the immense suffering Christ had to go through in order to redeem us from sin.

While believers should understand the significance of these religious festivals—as it foreshadows Christ’s redeeming work at the cross—it does not mean that Christians should continue to observe such practices today. 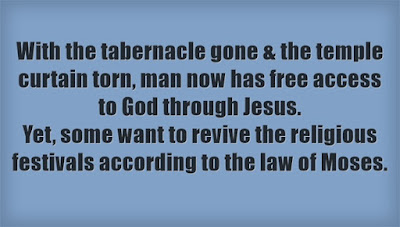 With the tabernacle gone & the temple curtain torn, man now has free access to God through Jesus. Yet, some want to revive the religious festivals according to the law of Moses, which reflects the old covenant. Isn’t that a regressive step?

And Christians should not feel guilty or think that they are relegated to second-class status if they do not observe such religious festivals.

Today, those who want to revive the religious feasts of the Old Testament are free to do so according to their interpretation of scripture. After all, its effects are positive, unlike destructive heresies such as hyper-grace.

However, it would be improper to impose their convictions on other believers that they must celebrate such festivals, which are merely a shadow of the substance, Christ, who has already come to fulfil all the requirements of the ceremonial laws of Moses. 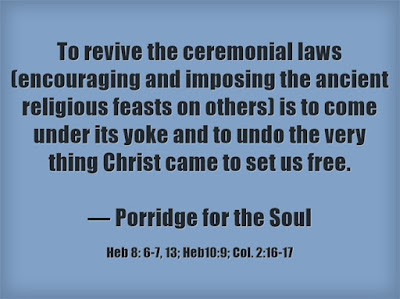 To conclude, it is absolutely clear that everything God does is summed up in His Son, Jesus. He is to have the preeminence in everything. He is central to our Christian faith. Christians should focus on Christ, rather than put aside certain special days in a year to celebrate such religious festivals. To observe such festivals is to detract from Christ the glory and honour that rightly belongs to Him. 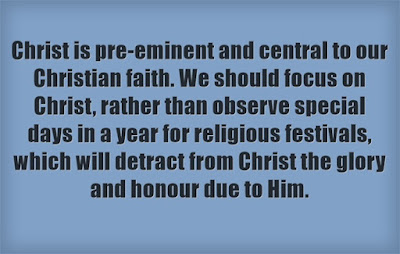 IN CHRIST ALONE
https://www.youtube.com/watch?v=AjR_A2pGPrY
In Christ alone my hope is found
He is my light, my strength, my song
This Cornerstone, this solid ground
Firm through the fiercest drought and storm
What heights of love, what depths of peace
When fears are stilled, when strivings cease
My Comforter, my All in All
Here in the love of Christ I stand.

CELEBRATE THE ANCIENT FEASTS?
“Today, those who want to revive the religious feasts of the Old Testament are free to do so according to their interpretation of scripture. After all, its effects are positive, unlike destructive heresies such as hyper-grace.
However, it would be improper to impose their convictions on other believers that they must celebrate such festivals, which are merely a shadow of the substance, Christ, who has already come to fulfil all the requirements of the ceremonial laws of Moses.”
-  Porridge for the Soul

Have God’s moral laws become irrelevant for believers saved by grace? Does grace do away with the Law? Has Jesus ever said “it’s all by God’s grace” and that the Law has been abolished for believers?
http://bit.ly/2rbsP1b

PASSOVER
“Passover reminds us of redemption from sin. It was the time when Jesus Christ, the Lamb of God, was offered as an atoning sacrifice for our sins. It is on that basis alone that God can justify the ungodly sinner. Just as the blood of a lamb sprinkled on the doorpost of Jewish homes caused the Spirit of the Lord to pass over those homes during the last plague on Egypt (Exodus 12), so those covered by the blood of the Lamb will escape the spiritual death and judgment God will visit upon all who reject Him. Of all the Jewish festivals, Passover is of the greatest importance because the Lord’s Supper was a Passover meal (Matthew 26:17–27). In passing the elements and telling the disciples to eat of His body, Jesus was presenting Himself as the ultimate Passover Lamb.”
Source of above Passover extract: https://www.gotquestions.org/Jewish-festivals.html

THE HEBREW ROOTS MOVEMENT
https://www.gotquestions.org/Hebrew-roots.html
Posted by P A Lim at 22:45