Did Christ come to bring peace or division? Though Jesus is the Prince of Peace, He is also the Great Divider. 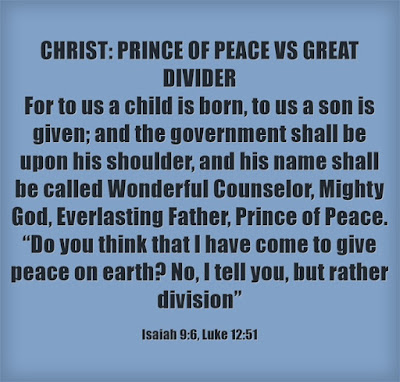 The chief purpose of Christ’s coming is clear. He came to die on the cross for man’s sin so that anyone who believes in Him is forgiven and seen as righteous in God’s eyes. Sin causes man to be separated from God’s favour and presence. Through Christ, this broken relationship between God and man is restored.

By faith in the saving virtue of Christ’s blood, man gains forgiveness of his sins, gets reconciled with God and enjoys peace with Him (Romans 5:1, Ephesians 2:8). Thus, one of the titles of Christ is Prince of Peace (Isaiah 9:6).

Christ is also the embodiment of peace in that He brings comfort and solace to troubled souls.

In the Sermon on the Mount, Christ taught that peace and harmony should prevail in our relationships. In short, He is an advocate of peace. We should try to live peaceably with all men as far as possible without compromising our values. “Blessed are the peacemakers, for they shall be called sons of God” (Matthew 5:9).

Writing to the Gentiles, Paul taught that Christ is our peace in that He unites both Jews and the Gentiles through His atoning sacrifice at the cross. “For He himself is our peace, who has made us both one and has broken down in his flesh the dividing wall of hostility” (Ephesians 2:14).

Now, Gentiles may enjoy God’s blessings like God’s favoured nation. “Through Christ Jesus, God has blessed the Gentiles with the same blessing he promised to Abraham” (Galatians 3:14 a).

Though Jesus came to bring peace to mankind, the Bible also presents a contrasting picture of Christ as the Great Divider—a concept less well understood and hardly preached. 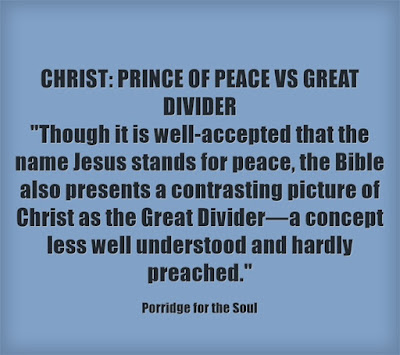 But if we desire to truly embrace the whole counsel found in God’s Word, we cannot merely settle for the half-truth—Christ is synonymous with peace alone. He also came to divide.

In history and world affairs, Christ is the Great Divider. Events either happen before Christ’s birth (BC) or after His birth (AD).

Though God offers the gift of eternal life to all (John 3:16-17), only those who believe in Christ are saved from judgment in the hereafter (John 3: 18).

Why does man reject the terms of salvation laid down by God? Because man refuses to give up on evil as it is so attractive. “And this is the judgment: the light has come into the world, and people loved the darkness rather than the light because their works were evil” (John 3:19).

Thus, man is divided into two categories according to their faith and allegiance to Christ. And everyone has to make this most important choice in life—whether to believe in Christ or not. If by default one refuses to choose, one automatically falls under the second category.

Notice that obedience is necessary when we profess faith in Christ. We cannot say we have faith but refuse to obey God. Faith and obedience come in a single package. “Whoever believes in the Son has eternal life; whoever does not obey the Son shall not see life, but the wrath of God remains on him” (John 3:36).

Christ also changes the way we see relationships. Traditionally, people are subdivided according to family units. But since Christ’s coming, people have been divided into two groups—those who trust and obey Him, and those who do not.

One day, Jesus was speaking His disciples when someone mentioned that His mother and brothers were outside, asking whether they might speak to Him (Matthew 12:46). Typically, we would think that Christ would take time off to meet his family members. However, on this occasion, Jesus did not follow social norms. But He was not being disrespectful to His earthly family. He did provide for his mother’s security as He hung on the cross.

Instead of spending time with His mother and brothers, He asks a rhetorical question: “Who is My mother and who are My brothers (Matthew 12:48)”? He was not referring to His biological mother or brothers, who were really His half-brothers since they shared the same mother.

We may come from a Christian family but we cannot claim to be saved based on the fact our parents are believers. Everyone has to be personally accountable to God. Christ is the Great Divider, who separates us according to our faith and allegiance to Him, not according to our bloodline.

Some may ask, How about the following verse? "Believe in the Lord Jesus and you will be saved, along with everyone in your household" (Acts 16:31).

The offer of salvation was made to the jailer and his family. His family had a most blessed opportunity to be saved. Yet, each family member had to believe in Christ, not just tap into the jailer’s faith. As they say, God has children but not grandchildren. Each one has to be individually accountable to God.

When Christ returns, He will separate the sheep from the goats. In this final judgment, Christ is looking for acts of mercy—how we live our lives.  The former represent true believers whereas the latter include pre-believers and those who profess to believe in Christ but do not live out their faith (Matthew 25: 31-46).

Christ, the Great Divider, also known as the ultimate Judge (1 Corinthians 4:4-5), will reward the righteous (sheep) with eternal life but the rest (goats) will receive eternal punishment (Matthew 25: 46).

To recapitulate, did Christ come to give peace or division? Christ is both the Prince of Peace and the Great Divider.

On one hand, Christ came to reconcile man to God and grant us peace with God. He also grants us peace and comfort in our trials and tribulations.

There is no neutral position. None can be fence sitters. Jesus says that neutrality towards him is really opposition to Him. “Whoever is not with me is against me, and whoever does not gather with me scatters” (Matthew 12:30).

Every man is essentially a free agent capable of making moral choices once we attain the age of accountability. The choice is entirely left to us. 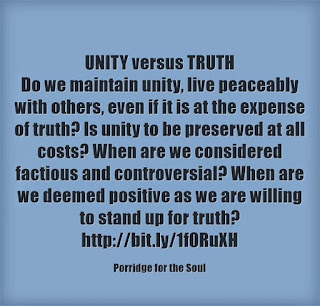 WHEN DOES TOLERANCE BECOME COMPROMISE?
Tolerance is often regarded as a positive trait. Sometimes we think that maturity means we must always be tolerant—even to the extent of condoning false teaching.
http://bit.ly/1NPpH1f
Posted by P A Lim at 01:50

Many believers focus on the  privileges  of being a Christian and forget that there are  conditions  attached to the blessings. ** In ... 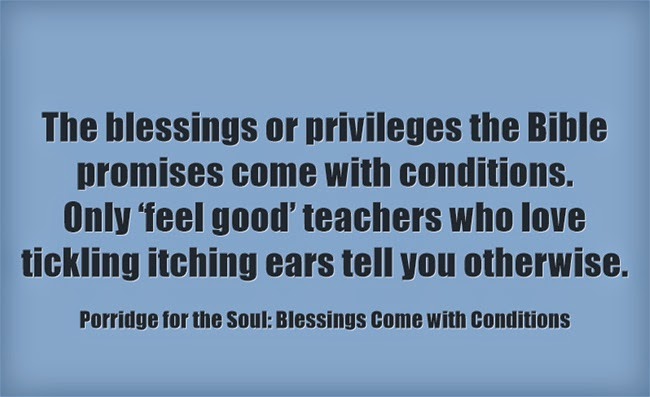