THE FATHER HEART OF GOD: MORE THAN UNCONDITIONAL LOVE

The most significant aspect of the Father Heart of God is that He loves all unconditionally, best illustrated in the Parable of the Prodigal Son (Luke 15:11-32).

Unconditional acceptance is the theme of the parable. When the younger son asked his father for the share of his inheritance, his wish was granted. As the story goes, he squandered all his resources. Finally, when he came to his senses and returned home, did punishment or censure await him? No. In fact, his father embraced him and threw a party to celebrate his homecoming. This parable epitomises grace—unconditional love and acceptance reflective of the Father Heart of God for His children.

However, there is much more to the Father Heart of God than unconditional love. We need to go deeper to appreciate the multitudinous ways His heart throbs for us.

Not only does God want us to know His unconditional love, He also wants us to know the following …


LET US CONSIDER EACH CHARACTERISTIC OF THE FATHER HEART OF GOD IN TURN:

He loves to develop an intimate relationship with us. So we need to seek Him that we might know Him.

As for you, my son Solomon, know the God of your father, and serve Him with a whole heart and a willing mind; for the LORD searches all hearts, and understands every intent of the thoughts. If you seek Him, He will let you find Him; but if you forsake Him, He will reject you forever.
(1 Chronicles 28:9)

And you will seek Me and find Me, when you search for Me with all your heart.
(Jeremiah 29:13) 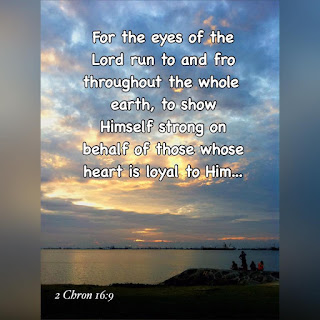 He is our friend—provided we fear and obey Him.
The Lord is a friend to those who fear Him.
He teaches them his covenant.
(Psalm 25:14)

You are my friends if you do what I command. I no longer call you slaves, because a master doesn’t confide in his slaves. Now you are my friends, since I have told you everything the Father told me.
(John 15: 14-15)

He pities us when we get into trouble or fail Him.
As a father pities his children,
So the Lord pities those who fear Him.
For He knows our frame;
He remembers that we are dust.
(Psalm 103:13-14)

He is absolutely faithful and trustworthy.
Know therefore that the Lord your God is God, the faithful God who keeps covenant and steadfast love with those who love him and keep his commandments, to a thousand generations.
(Deuteronomy 7:9)

If we are faithless, He remains faithful—for He cannot deny himself.
(2 Timothy 2:13)

I have said these things to you, that in me you may have peace. In the world you will have tribulation. But take heart; I have overcome the world.
(John 16:33)

He has our welfare at heart—though we might be unable to figure out the wisdom behind his plans.
And we know that all things work together for good to those who love God, to those who are the called according to His purpose.
(Romans 8:28)

“For I know the plans I have for you”, says the Lord. “They are plans for good and not for disaster, to give you a future and a hope.”
(Jeremiah 29:11)

He is the One who first chose us to be His beloved by demonstrating His love towards us.
But God demonstrates His own love toward us, in that while we were still sinners, Christ died for us.
(Romans 5:8)

You did not choose Me, but I chose you and appointed you that you should go and bear fruit, and that your fruit should remain, that whatever you ask the Father in My name He may give you.
(John 15:6)

He has everything planned out for our lives—what we shall be, where we shall live and how we can live purposeful lives to glorify His name.
Your eyes have seen my unformed substance;
And in Your book were all written
The days that were ordained for me,
When as yet there was not one of them.
(Psalm 139:16)

Before I formed you in the womb I knew you,
And before you were born I consecrated you;
I have appointed you a prophet to the nations.
(Jeremiah 1:5)

He made from one man every nation of mankind to live on all the face of the earth, having determined their appointed times and the boundaries of their habitation.
(Acts 17:26)

He has a destiny for His children. Unless we give up control of our lives and lose ourselves in finding and doing His will, we can never be truly fulfilled.
If any of you wants to be my follower, you must turn from your selfish ways, take up your cross daily, and follow me.
(Luke 9:23)

Jesus said to them, “My food is to do the will of Him who sent Me and to accomplish His work.
(John 4:34)

The thief comes only to steal and kill and destroy. I came that they may have life and have it abundantly.
(John10:10)

He chastises or disciplines us because He loves us.
My son, do not despise the chastening of the Lord,
Nor be discouraged when you are rebuked by Him;
For whom the Lord loves He chastens,
And scourges every son whom He receives.
(Hebrews 12:5-6)

He may keep us waiting or say ‘No’ to us when we pray—all for valid reasons.
Delight yourself also in the Lord,
And He shall give you the desires of your heart.
Commit your way to the Lord,
Trust also in Him,
And He shall bring it to pass.
He shall bring forth your righteousness as the light,
And your justice as the noonday.
Rest in the Lord, and wait patiently for Him;
Do not fret because of him who prospers in his way,
Because of the man who brings wicked schemes to pass.
(Psalm 37:4-7)

He has the power to surprise us with good things, just like our earthly father.
Now all glory to God, who is able, through his mighty power at work within us, to accomplish infinitely more than we might ask or think.
(Ephesians 3:20)

So if you sinful people know how to give good gifts to your children, how much more will your heavenly Father give the Holy Spirit to those who ask Him.
(Luke 11:13)

But I would feed you with the finest wheat.
I would satisfy you with wild honey from the rock.
(Psalm 81:16)

He is holy and is grieved when we sin against Him.
And do not grieve the Holy Spirit of God, by whom you were sealed for the day of redemption.
(Ephesians 4:30)

He is just. If we willfully persist in sin, His anger and judgment will befall us.
For if we sin willfully after we have received the knowledge of the truth, there no longer remains a sacrifice for sins, but a certain fearful expectation of judgment, and fiery indignation which will devour the adversaries.
(Hebrews 10:26-27)

For we know Him who said, “Vengeance is Mine, I will repay,” says the Lord. And again, “The Lord will judge His people.” It is a fearful thing to fall into the hands of the living God.
(Hebrews 10:30-31)

By now, we would have realised that the Father Heart of God—the heart of our heavenly Father for His children—is much more than just His unconditional love.

Granted we need to be born again in order to experience in full the Father Heart of God, it is sad that many believers are living defeated lives as if they are “fatherless”, having forgotten their spiritual position and heritage as a result of the new birth. They have fallen into fear, thinking that they are slaves instead of seeing themselves as children of God. This failure to embrace the Father Heart of God is often the cause of much pain and turmoil in their lives.

For you did not receive the spirit of slavery to fall back into fear, but you have received the Spirit of adoption as sons, by whom we cry, “Abba! Father!” The Spirit himself bears witness with our spirit that we are children of God, and if children, then heirs—heirs of God and fellow heirs with Christ, provided we suffer with him in order that we may also be glorified with him.
(Romans 8:15-17) 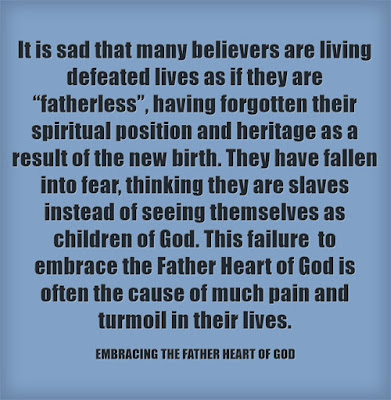 Peter echoes Paul’s exhortation above in Romans 8 that we are a special people—“King’s kids”.
But you are a chosen race, a royal priesthood, a holy nation, a people for his own possession, that you may proclaim the excellencies of Him who called you out of darkness into His marvelous light. Once you were not a people, but now you are God's people; once you had not received mercy, but now you have received mercy.
(1 Peter 2:9-10)

So let us stand with our heads held up high, lay hold of our identity as God’s children. For we have a heavenly Father who loves us unconditionally and much more.

As believers fully embrace the Father Heart of God, let us also pray that more spiritual fathers will arise to take up the challenge of raising a younger generation who know their spiritual inheritance and who walk in victory for the extension of God’s kingdom.

HOW TO SHARE "THE FATHER HEART OF GOD: MORE THAN UNCONDITIONAL LOVE"
(You may use the following introduction and link)
The big thing about the Father Heart of God is that He loves all unconditionally, best illustrated in the Parable of the Prodigal Son. However, there is much more to the Father Heart of God. We need to go deeper to appreciate the various ways His heart throbs for us.
http://bit.ly/1K1hkN3

RELATED POSTS
FATHERHOOD: EMULATING GOD THE FATHER
Being the perfect Father, God is the role model for earthly fathers—and mothers as well.
http://bit.ly/1OpcjgU
CULTIVATING A SHEPHERD’S HEART
Let those who oversee the flock identify with the concerns of the Chief Shepherd. Let's learn from the Chief Shepherd what it means to have a heart for the flock.
http://bit.ly/1hQ3pP0
PASSING THE BATON
Exploring the vital issue of leadership succession
http://bit.ly/1VIM9dq