CAN A BELIEVER FALL OUT OF FAVOUR WITH GOD?

Is it possible for Christians to fall out of God’s favour permanently?

What can we learn from the exodus generation who failed to enter the Promised Land?

Those who embrace the Once Saved, Always Saved (OSAS) premise believe that whatever moral decisions Christians make after being saved do not matter at all—since they will finally be saved, no matter what happens.

According to this premise, they can sin, deny God or commit apostasy and heaven will welcome them with open arms when they leave this earth. Whatever they do or don’t do is not going to affect their eternal destiny.

In other words, OSAS teaching may lead believers to believe that, after conversion, they need not be accountable or responsible for their actions. (I say may because there are those who embrace OSAS who live exemplary lives).

The OSAS stance forces us to ignore or overlook vast portions of New Testament (NT) teachings that hold believers accountable for their actions. Let’s start with the account about the exodus generation in the NT. 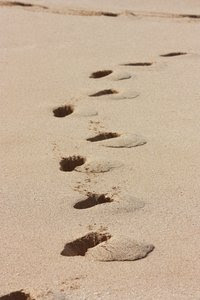 Many Israelites were destroyed after their exodus from Egypt because they did not believe in God and sinned. This falling away, according to the apostle Paul, serves as a warning to believers that they need to persevere in their faith in order that they might not be destroyed (Jude 1:5, 1 Corinthians 10:1-12).

The purpose of Paul’s teaching is that believers today might fear God and take heed so that they are not destroyed in the same manner as the exodus generation through sin, carelessness and complacency.

First, let’s recall God’s faithfulness (1 Corinthians 10) among those who were saved out from Egypt:

Despite God’s faithfulness towards them, they committed the following sins:

Now some smart aleck might tell us that all this happened in the Old Testament (OT); but we are now living in the age of God’s grace.

But Paul warns us that what happened to them serves as an object lesson to us (1 Corinthians 10:6, 11, 12). Why should Paul refer to the Israelites’ failures in his NT teachings if its relevance is only for a bygone era?

Is it possible for believers to fall out of God’s favour and be destroyed though they once knew God's goodness and witnessed His guidance, provision and deliverance?

The moral failures of the exodus generation serve as an example for believers today and a warning to them to stay holy and stay strong in the faith.

Just as believers long ago need to persevere in the faith before they can possess the Promised Land, believers today need to stay faithful to gain access to salvation’s ultimate reward—heaven (Hebrews 10:36-39).

To reiterate, the exodus moral failures show us that those who are saved can be destroyed later, thus debunking the OSAS argument.

Nowhere in the Bible does it ever say that believers lose their right to choose between right and wrong. God will never stop believers from doing anything, either right or wrong, even after they have been saved. Man has always been a free moral agent—whether before or after conversion—ever since the time of Adam and Eve in the garden of Eden.

A person may have chosen to believe in Christ once upon a time. But somewhere along life’s journey, he may decide to live in sin, deny God or commit apostasy. Do you think God will still take him into heaven when he leaves this earth? No.

When a righteous person turns away from his righteousness and does injustice, he shall die for it; for the injustice that he has done he shall die (Ezekiel 18:26).

To him who chooses his own way, I would say this: Do not be deluded; don’t believe in the lie of Once Saved, Always Saved (OSAS). The Word will not be mocked. Study and meditate on the all the passages given below for the sake of your eternal security.

By the way, the number of references one can marshal to support OSAS pales in comparison to tons of verses that repudiate this “feel good” teaching, OSAS.

What are some of the references against OSAS?

SAVED BUT LATER DESTROYED
Now I want to remind you, although you once fully knew it, that Jesus, who saved a people out of the land of Egypt, afterward destroyed those who did not believe. And the angels who did not stay within their own position of authority, but left their proper dwelling, he has kept in eternal chains under gloomy darkness until the judgment of the great day—just as Sodom and Gomorrah and the surrounding cities, which likewise indulged in sexual immorality and pursued unnatural desire, serve as an example by undergoing a punishment of eternal fire.
(Jude 1:5-7)

WARNING AGAINST IMMORALITY AND IDOLTARY
For I do not want you to be unaware, brothers, that our fathers were all under the cloud, and all passed through the sea, and all were baptized into Moses in the cloud and in the sea, and all ate the same spiritual food, and all drank the same spiritual drink. For they drank from the spiritual Rock that followed them, and the Rock was Christ. Nevertheless, with most of them God was not pleased, for they were overthrown in the wilderness.

Now these things happened to them as an example, but they were written down for our instruction, on whom the end of the ages has come. Therefore let anyone who thinks that he stands take heed lest he fall.
(1 Corinthians 10:1-12)

FAILURE OF THE WILDERNESS WANDERERS
For who, having heard, rebelled? Indeed, was it not all who came out of Egypt, led by Moses? Now with whom was He angry forty years? Was it not with those who sinned, whose corpses fell in the wilderness? And to whom did He swear that they would not enter His rest, but to those who did not obey? So we see that they could not enter in because of unbelief.
(Hebrews 3:16-19)

I hope as you correlate the above account of the moral failures of the exodus generation with the following references, it will become absolutely clear that OSAS cannot stand when the full weight of scripture is brought to bear upon it.

TASTING GOD’S GOODNESS IS NO GUARANTEE OF FUTURE BLESSINGS
For it is impossible, in the case of those who have once been enlightened, who have tasted the heavenly gift, and have shared in the Holy Spirit, and have tasted the goodness of the word of God and the powers of the age to come, and then have fallen away, to restore them again to repentance, since they are crucifying once again the Son of God to their own harm and holding him up to contempt.
(Hebrews 6:4-6)

For if, after they have escaped the defilements of the world through the knowledge of our Lord and Savior Jesus Christ, they are again entangled in them and overcome, the last state has become worse for them than the first.
(2 Peter 2:20)

For if we go on sinning deliberately after receiving the knowledge of the truth, there no longer remains a sacrifice for sins.
(Hebrews 10:26)

NEED TO ENDURE
For you have need of endurance, so that when you have done the will of God you may receive what is promised. For,
“Yet a little while,
and the coming one will come and will not delay;
but my righteous one shall live by faith,
and if he shrinks back,
my soul has no pleasure in him.”
But we are not of those who shrink back and are destroyed, but of those who have faith and preserve their souls.
(Hebrews 10:36-39) 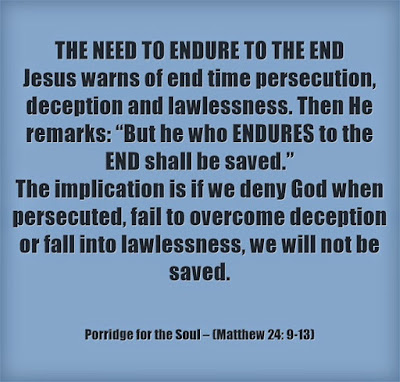 THE GREAT FALLING AWAY
The believers’ spiritual status is not static. Though we have been enlightened by the truth and transformed by the Holy Spirit, there is no iron-clad guarantee we won’t change. That’s because we are sinful by nature. And, because we have a will, we can choose to remain in God’s favour or reject Him.
http://bit.ly/1j1YYA1

IS CALVIN CORRECT?
John Calvin, the great reformer, believed that Christians can never lose their salvation. That is, Once Saved, Always Saved (OSAS). Is he correct?
http://bit.ly/1D1Ij6r

A TALE OF TWO BUDDIES
Two Christian friends, Alex and Bob, decide to go on a holiday. While travelling on a treacherous road that cuts through mountainous terrain, their 4WD vehicle fell off the cliff. Both died. What happens next?
http://bit.ly/1CGv1hz

ONCE SAVED, ALWAYS SAVED?
"The challenge I have with this teaching—ONCE SAVED, ALWAYS SAVED (OSAS)—is its failure to interpret individual passages honestly that disagree with this particular system. For example, Hebrews 6:1-8 and 10:24-29 clearly teach that people, after receiving the saving knowledge of Christ, can fall away and lose their salvation. Second Peter 2:20-22 and James 5:19-20 are as clear as tar on snow that a believer can fall away and once again be called sinners who have to be restored."

CAN BELIEVERS LOSE THEIR SALVATION?
Listen to this balanced seasoned teacher, David Pawson. A must-watch video.
He is able to keep us in the faith AND we are to keep ourselves in His love.
If we keep ourselves in the love of God, He keeps what we have committed to Him.
https://www.youtube.com/watch?v=Vy3tSIg7Gi0