AGAINST THE ORDER OF NATURE

When it comes to sexual orientation, we are free to choose whatever rainbow we wish—whether it is the rainbow with six colours, symbolic of the gay movement, OR the rainbow that reflects God’s faithfulness to His promise. But, having decided, we cannot choose the consequences of our decision. 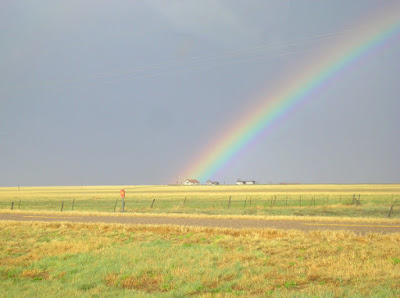 Recently, the US Supreme Court passed a ruling to legalise same-sex marriage. The gay movement was jubilant over this verdict. Many who identify themselves as homosexuals celebrated by putting a six-colour rainbow on their Facebook profile as the rainbow is an established symbol of the gay movement. * 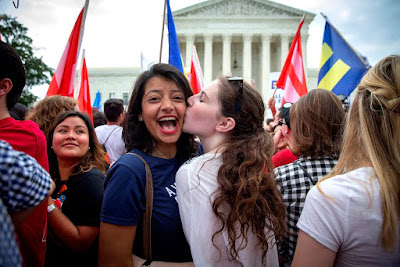 For Christians, however, the rainbow is a symbol of God’s mercy and faithfulness—a seal of His promise that, after the great flood, He will never destroy man in such a massive deluge again. **

Whereas the typical rainbow has seven colours, the rainbow adopted by the gay movement on social media is a six-colour one.

Some say that the gender of one’s sex partner is a matter of personal preference—just like some people relish spicy food while others delight in milder, non-spicy food. Or, using another analogy, some like butter cake while others dread it. God would understand, they argue. After all, isn’t He a God of love? Won’t He accept our choice of sexual partner, even if it is the same sex, as long as everything is done in the name of love between consenting adults?

If Mother Nature had intended us to have same-sex partners, she must have made some serious mistakes along the way. 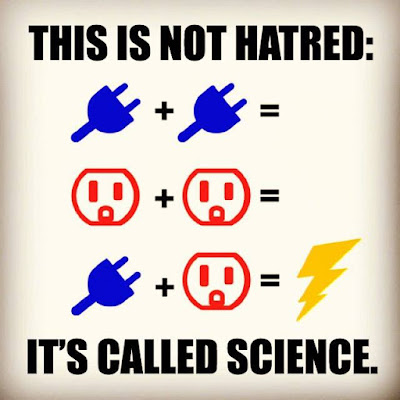 First, let’s reflect on the wisdom behind Mother Nature’s design of the male and female anatomy. Even if we don’t believe in God, we can observe and learn much. A spontaneous “lock and key mechanism” is activated when a man and a woman engage in sex, not when lesbians have sex. The latter would have to improvise or make use of sex toys to make it happen.

Furthermore, the sexual act between heterosexual partners has the potential of producing offspring, thus completing Mother Nature’s cycle of life where seniors get replaced by the young. However, if male homosexuals were to engage in sex, they would be “firing blanks” for the “receiving end” is unfruitful.

By the way, isn’t it repulsive and against the order of nature to mix recreational activity and excretory function in the same conduit? Amphibians, reptiles and birds have a common outlet, termed the cloaca (‘sewer’), into which the intestinal, urinary, and genital tracts open. It is not present in placental mammals. Why should man stoop so low to follow members of the animal kingdom lower in the creation order?

If same-sex partners want to have children, they would have to adopt or employ surrogate mothers, which is not natural and spontaneous. And how could they declare to their friends that their children look like them or are as smart like them? (They may be able to appreciate the genetic input from one of the same-sex partners).

Will their children, whether through adoption or surrogacy, be able to appreciate the tender, loving care of a mother balanced with the discipline and protection of a father, such as can only be found in a traditional family unit?

For the above reasons, same-sex sexual orientation was clearly not Mother Nature’s intention from the very beginning. It seems that she did not make any mistake at all.

As to whether we are born gay, many of the initial studies, which were highly touted as "proof" for a biological (genetic) basis for homosexuality, have been contradicted later by more thorough studies. 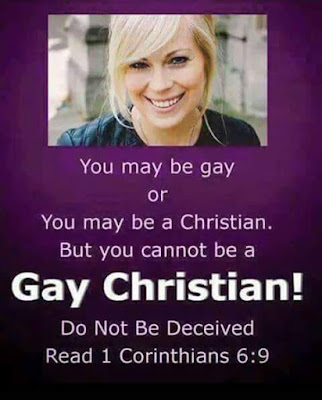 Next, we consider the biblical view of sexuality and sexual orientation.

The Bible is clear and unequivocal in its stand on homosexuality: “Because of this, God gave them over to shameful lusts. Even their women exchanged natural relations for unnatural ones. In the same way, the men also abandoned natural relations with women and were inflamed with lust for one another. Men committed indecent acts with other men, and received in themselves the due penalty for their perversion” (Romans 1:26-27).

God condemns such unnatural sex both in the Old and New Testament. He sent fire and brimstone raining down on Sodom because its inhabitants practised sodomy.

The Bible states clearly that there is no provision for any alternative lifestyle for sexual fulfillment apart from a monogamous, heterosexual relationship between a man and a woman who are committed to one another by marriage. http://bit.ly/19dSlGo

Following the landmark court ruling in US, while worshipping in church, the thought crossed my mind that most worship songs highlight God’s love and mercy rather than His justice and righteousness.

It’s typical of human nature to emphasise the love and mercy of God—His willingness to forgive. We tend to downplay His wrath and judgment, forgetting that His harsher side—justice and righteousness—is just as real and significant.

To presume that God loves us whatever our choice of sexual partners—even if they are of the same sex—is dangerous. To think that sexual orientation does not matter as long as everything is done in the name of love between consenting adults is being presumptuous.

God loves us but He will definitely punish those who go against His laws, including those who commit homosexuality.

Why? It’s because the foundation of His throne is built on righteousness and justice (Psalm 89:14).

“The Lord, the Lord, a God merciful and gracious, slow to anger, and abounding in steadfast love and faithfulness, keeping steadfast love for thousands, forgiving iniquity and transgression and sin, but who will by no means clear the guilty, visiting the iniquity of the fathers on the children and the children's children, to the third and the fourth generation.”
(Exodus 34:6-7)

Jesus forgave the woman caught in the act of adultery, unlike the crowd who wanted to stone her. But He also required that she repented of her sinful lifestyle: “Go and sin no more” (John 8: 11).

Jesus is gracious to forgive. But He also demands that whoever He forgives must not willfully continue living in sin. 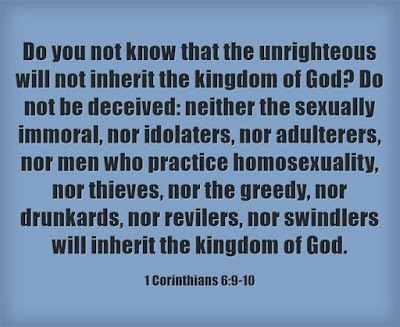 When it comes to sexual orientation, we are free to choose whatever rainbow we wish—whether it is the rainbow with six colours, symbolic of the gay movement, OR the rainbow that reflects God’s faithfulness to His promise. But, having decided, we cannot choose the consequences of our decision. 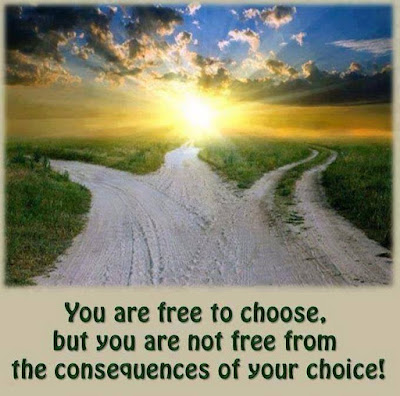 We can choose either to reject or obey God’s laws. But, having done so, we cannot choose the consequences of our decision. 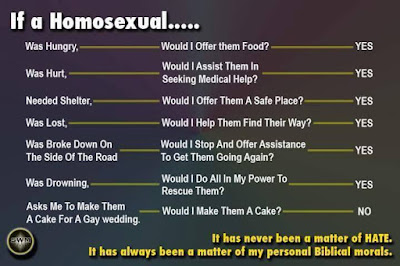 Though the Bible is firm and unequivocal in its stand on homosexuality, how we approach the homosexual as a person is strikingly different. We don't condone the practice as the Bible does not approve of it. But we love the homosexual, putting ourselves in his or her shoes, that he or she has already suffered enough, having to face the pressure from society’s disapproval.
Just as how Jesus dealt with the loose women who crossed His path, we must treat the homosexual with love, compassion, empathy and a non-judgmental attitude. We need to treat sexual sins, such as homosexuality, as if they are non-sexual ones such as greed or lying. God’s forgiveness is equally open to those who commit sexual or non-sexual sins.

A rainbow is produced by the refraction and reflection of the sun's light through raindrops. Its appearance shows us that rain has stopped.
After the great flood, God made a covenant with Noah that “never again will floodwaters kill all living creatures; never again will a flood destroy the earth."  He then set a rainbow in the sky to symbolise the covenant He made with the Noah and the inhabitants of the earth, even future generations (Genesis 9: 11-13)
Thus the rainbow is the seal of God’s covenant that He will never destroy man through a global flood again (Genesis 9:15).

BRACING FOR TOUGH TIMES
Will there come a time when many believers lose faith in God?
http://bit.ly/1Cw0TQp

MARRIAGE UNDER ATTACK
Today, the institution of marriage has come under attack from so many quarters. Man has rationalised practices like fornication, trial marriages, co-habitation, homosexuality, adultery, divorce and re-marriage.
Mae West was quoted as saying, “Marriage is a great institution, but I’m not ready for an institution.”
http://bit.ly/19dSlGo

THE GREAT FALLING AWAY
Believers should not be surprised at all by the great falling away before Jesus returns. Men will become increasingly evil.
http://bit.ly/1j1YYA1

LIGHT OUT OF DARKNESS
In the end times that we're now living in, there will be two sharply contrasting scenarios on earth: While tumultuous signs (earthquakes, wars, famine, pestilence) and the evil deeds of man become more and more pronounced, there is a spiritual awakening of unimaginable scale. While ominous portents and man’s evil increase, God’s glory is being revealed more and more.
http://bit.ly/1hu1EA9

IS IT TIME TO EMBRACE GOD’S JUDGMENT?
John Burton believes that the legalization of homosexuality in the USA is the fault of a sleeping, passive American church that refuses to preach uncomfortable, black and white truth. He believes the question at this hour is not whether God should bring judgment to homosexuals or not.
http://www.johnburton.net/2015/06/30/homosexual-normalization-is-it-time-to-embrace-gods-judgment/

RESIST AND REACH OUT
http://www.charismanews.com/opinion/in-the-line-of-fire/43346-the-great-gay-deception
Posted by P A Lim at 02:30