CAN TRUE BELIEVERS DENY THEIR MASTER?

In light of the pressure faced by persecuted Christians in the Middle East, this is an important question that needs to be asked.

Many of us think it is highly unlikely that genuine Christians will deny God except under extremely trying circumstances—like when a gun barrel is pointed at one’s head.

However, it is possible for true believers to deny Christ because God gave every man a free will—that which ultimately determines whether His grace is efficacious for man.

Furthermore, various push and pull factors can cause even genuine believers to deny Christ whose blood was shed for man's sins.

Push factors include use of duress, blackmail and threats to one’s family, property, security or survival. One example is forced denial through gunpoint.

Pull factors include the lust for power, riches and fleshly pleasures. Initially this ‘pull category’ merely causes believers to backslide. As the spiritual decline worsens, the heart may become hardened—and satan has a veritable foothold in their lives. Evil indulgences and sinful pursuits may then lead to a ‘point of no return’—where even genuine believers may deny God.

The predisposing factor for believers to deny God is their sinful nature. While there is no sin that God’s grace and mercy cannot avail, we must not swing to the other extreme and underestimate the reality of our inner nature.

"The human heart is the most deceitful of all things, and desperately wicked. Who really knows how bad it is?” (Jeremiah 17:9).

Referring to the ugliness of our sinful nature, theologian John R. W. Stott states: “Indeed, an honest and humble acknowledgment of the hopeless evil of our flesh, even after the new birth, is the first step to holiness. To speak quite plainly, some of us are not leading holy lives for the simple reason that we have too high an opinion of ourselves.” — Men Made New (Downers Grove: Inter-Varsity Press, 1966), p. 74.

Denial of one’s faith is possible

“If we deny him, he also will deny us” (2 Timothy 2:12b). Paul was certainly addressing a young believer in his letter.

“But false prophets also arose among the people, just as there will be false teachers among you, who will secretly bring in destructive heresies, even denying the Master who bought them, bringing upon themselves swift destruction” (2 Peter 2:1).

‘Bought by the precious blood of Christ’ (1 Peter 1:19) refers to true believers whose lives have experienced God’s forgiveness and cleansing.

Peter spent so much time moving around and living with the Master. He had the enviable privilege of witnessing His miraculous power and Transfiguration (with James and John of the inner circle). He confessed that Jesus was the Christ when others were not sure. We would think he would be the last person to deny Christ. But we are sadly mistaken. 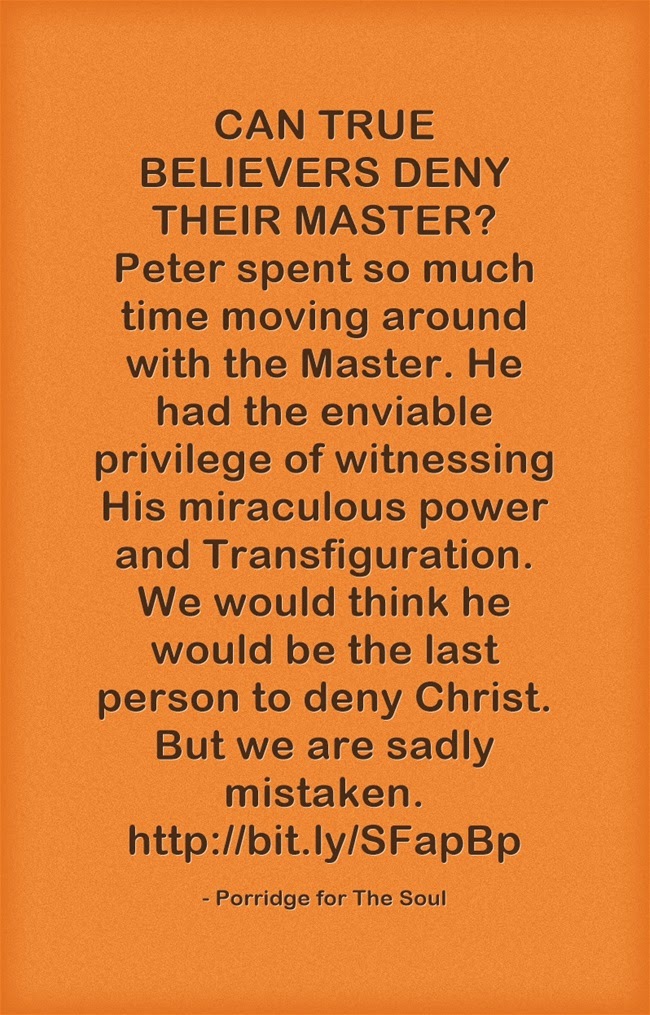 So when people tell me that those who deny Christ were never really converted in the first place, I am truly puzzled. How are we going to reconcile this misguided stance with the evidence from scriptures, biblical examples and contemporary examples that show that it is possible for believers to deny God? 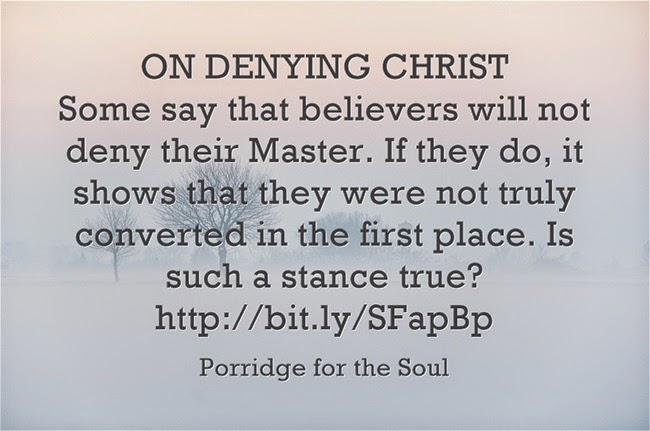 Denial of one’s faith will increase amid end time persecution

“Then you will be arrested, persecuted, and killed. You will be hated all over the world because you are my followers. And many will turn away from me and betray and hate each other. And many false prophets will appear and will deceive many people. Sin will be rampant everywhere, and the love of many will grow cold. But the one who endures to the end will be saved” (Matthew 24:9-13).

In the above Olivet Discourse, Jesus was addressing his disciples, telling them what to expect during the end times (or rather the beginning of the end).

A state of apostasy is worse than a state of ignorance

“For if, after they have escaped the defilements of the world through the knowledge of our Lord and Savior Jesus Christ, they are again entangled in them and overcome, the last state has become worse for them than the first. For it would have been better for them never to have known the way of righteousness than after knowing it to turn back from the holy commandment delivered to them” (2 Peter 2:20-21).

God can overlook lapses of faith but denial is more serious

“If we endure, we will also reign with him;
if we deny him, he also will deny us;
if we are faithless, he remains faithful—for he cannot deny himself”
(2 Timothy 2:12-13).

“For it is impossible, in the case of those who have once been enlightened, who have tasted the heavenly gift, and have shared in the Holy Spirit, and have tasted the goodness of the word of God and the powers of the age to come, and then have fallen away, to restore them again to repentance, since they are crucifying once again the Son of God to their own harm and holding him up to contempt. For land that has drunk the rain that often falls on it, and produces a crop useful to those for whose sake it is cultivated, receives a blessing from God. But if it bears thorns and thistles, it is worthless and near to being cursed, and its end is to be burned” (Hebrews 6: 4-8).

What is the fate of believers who deny Christ—whose faith does not endure till the end?

“For you have need of endurance, so that when you have done the will of God you may receive what is promised. For,
‘Yet a little while,
and the coming one will come and will not delay;
but my righteous one shall live by faith,
and if he shrinks back,
my soul has no pleasure in him.’
But we are not of those who shrink back and are destroyed, but of those who have faith and preserve their souls” (Hebrews 10:36-39).
Jesus’ teaching implies that only those who do not give up their faith amid persecution will be saved
“Then you will be arrested, persecuted, and killed. You will be hated all over the world because you are my followers. And many will turn away from me and betray and hate each other. And many false prophets will appear and will deceive many people. Sin will be rampant everywhere, and the love of many will grow cold. But the one who endures to the end will be saved” (Matthew 24:9-13).
Humility needed

The purpose of sharing this post is to warn believers: We mustn’t think that we are so strong that we will definitely not turn away from God (1 Corinthians 10:12). Instead let's “work out our salvation with fear and trembling” (Philippians 2:12) so that we may be preserved from this tragic state where we deny the Master who bought us with His precious blood.

Lest we say it won’t happen to us, let’s remember what happened to Peter—he denied the Master three times.

“Therefore let anyone who thinks that he stands take heed lest he fall” (1 Corinthians 10:12).

Let us emulate the tax collector’s humility. He, who would not even dare to look up to heaven, beat his breast and said, 'God, have mercy on me, a sinner’ (Luke 18:9-14).

Of course, it would not be fair if I fail to allude to the fact that God who began the good work in us will bring it to completion one day (Philippians 1:6). Neither should I fail to mention that God gave a reprieve to Peter even though he denied Him three times.

However, we need to play our part too:


Lastly, let’s cry out to God that He will enable us to remain strong and steadfast in these perilous and tumultuous end times. “Preserve me, O God, for in you I take refuge” (Psalm 16:1).

Is there eternal security for believers if they deny God or continue living in sin?

REPETITIVE SINNING
What fate awaits those who sin repeatedly after they have believed?
http://bit.ly/1hhs75c

MOTHER OF ALL BATTLES
A clear understanding of the ongoing battle between the “old man” and “new man” is essential before we can walk in victory.
http://bit.ly/1awc42C

SAINT OR SINNER?
Is the believer essentially a saint or sinner? If he is a ‘saint’, why is he still struggling with sin?
http://bit.ly/1lTj26a

CAN A GENUINE CHRISTIAN COMMIT APOSTASY?
Solid meat. Hard sayings. Many will rationalise that Hebrews 6: :4-8 does not refer to believers; they were unregenerate in the first place. Is it so?
http://www.jesuswalk.com/hebrews/apostasy.htm

SUBTLE ENTANGLEMENTS
We have heard of turtles getting entangled in fishermen’s nets. As they can no longer roam in search for food, some may eventually die. Somewhere along the way believers too get entangled in various pursuits which either impede progress or lead them off the intended spiritual path.
http://bit.ly/1k4vhxw