STEPPING INTO OUR DESTINY

When we step out by faith to embrace God’s calling, we need to focus on His promises rather than obstacles.

God’s goodness is symbolised by a huge bunch of grapes which the spies brought back from Canaan, the Promised Land. It was meant to be a foretaste of future blessing—to show the Israelites that God was about to lead them to take possession of a land flowing with milk and honey. 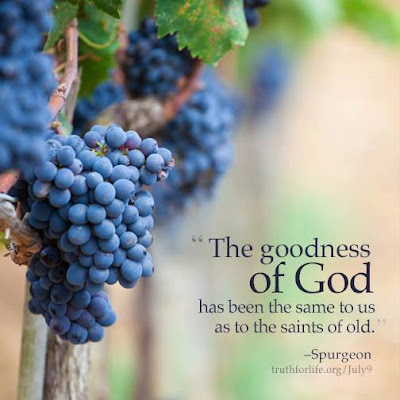 “When they came to the valley of Eshcol, they cut down a branch with a single cluster of grapes so large that it took two of them to carry it on a pole between them! They also brought back samples of the pomegranates and figs. That place was called the valley of Eshcol (which means “cluster”), because of the cluster of grapes the Israelite men cut there” (Numbers 13:23-24).

However, possessing the Promised Land was unlike taking a walk in the park. They needed to apprehend by faith the following: God is good and faithful and, secondly, they are able to defeat their enemies.

God had already miraculously delivered them from slavery in Egypt, protected them from the armies of Pharaoh—by causing the Red Sea to part for their safe passage—and provided manna to sustain them in the desert. Yet at Kadesh—when they were at the threshold of entering the Promised Land—the Israelites still found it difficult to trust in the God who is faithful (Numbers 13:25).

Despite the exciting possibility of abundant blessings that lay ahead, the majority of spies (10 out of 12) were intimidated by various obstacles. They felt the Canaanite cities were too well-fortified and defended by “giants”—men of great stature, the descendants of Anak. They saw themselves as grasshoppers and also thought that these “giants” would treat them as if they were grasshoppers (Numbers 13:33). What a self-image disaster!

The Israelites preferred to listen to the negative report of the 10 spies rather than the God-honouring testimony of Caleb and Joshua, who felt they were well able to defeat the Canaanites.

Notice that God had earlier promised His people through Moses that He will lead them to a land flowing with milk and honey after setting them free from oppression in Egypt (Exodus 3:17).

Whenever God leads us into new avenues or possibilities, there are hurdles to be overcome.

Firstly, we have to learn to trust God more. He has already proved His faithfulness towards us in the past. He now wants us to trust Him for greater things. He wants to move us to the next level. He wants us to step into our destiny. But are we ready? Like the psalmist, do we meditate on His faithfulness towards us in the past and trust Him this time? “But then I recall all you have done, O Lord; I remember your wonderful deeds of long ago” (Psalm 77:11).

Secondly, do we know who we are in Christ? We need to have a firm grasp of our identity in God’s eyes. We need to catch a fresh vision of God’s calling for our lives.

God’s plan for our lives dates back to the time we’re in our mother’s womb (Jeremiah 1:5) but all remains dormant until God gives us a revelation of who we are in Him—not just the logos but the rhema word.

Gideon saw himself as defeated, bereft of hope, as the Midianites invaded his homeland. Offering no resistance to the enemy, he was threshing wheat when God spoke to him through the angel, “The LORD is with you, you mighty man of valour … Go in this might of yours, and you shall save Israel from the hand of the Midianites. Have I not sent you?” (Judges 6:12, 14).

Earlier he had thought he was incapable of leading Israel against their enemies—coming from the weakest clan and being the most insignificant in his family. All that changed when God called him and gave his self-image a boost.

One can see a cup as half-empty or half-full and, in both instances, one is right. Gideon saw himself as “empty” when he was threshing wheat. But when God called him, his mind was renewed. He then saw himself anew, and was filled with courage and boldness. And, as they say, the rest is history.

Like any God-inspired venture, taking possession of the Promised Land is not only filled with exciting possibilities and blessings but obstacles as well.

Do we see—with the eyes of faith—the cluster of grapes from the Valley of Eshcol, a testimony to God’s goodness, abundance and faithfulness.  Or does the foreboding picture of “giants” looming over us stop us from stepping out by faith? 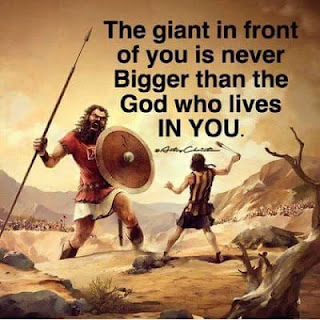 Let’s rise up to the challenge and step into our destiny. Let’s embrace the fullness of our inheritance in Christ—whatever God has in store for our lives.


THE POWER OF VISION
By embracing a God-inspired vision, we can live purposefully—by design and not by default.
https://bit.ly/1aAGtZG

SLAYING THE GIANTS
How do we overcome the giants—whether real or imaginary—in our lives?
https://bit.ly/2lvh6uc

STEPPING OUT OF OUR COMFORT ZONE
Discomfort awaits the faithful. To bring out the best in us, God may lead us to places where we get stretched like a rubber band.
https://bit.ly/2jVQP7K
Posted by P A Lim at 06:35